Hosts India will need to be more clinical with their finishing when they face a struggling Chinese Taipei in a must-win group match of the women's Asian Cup in Navi Mumbaion Sunday. 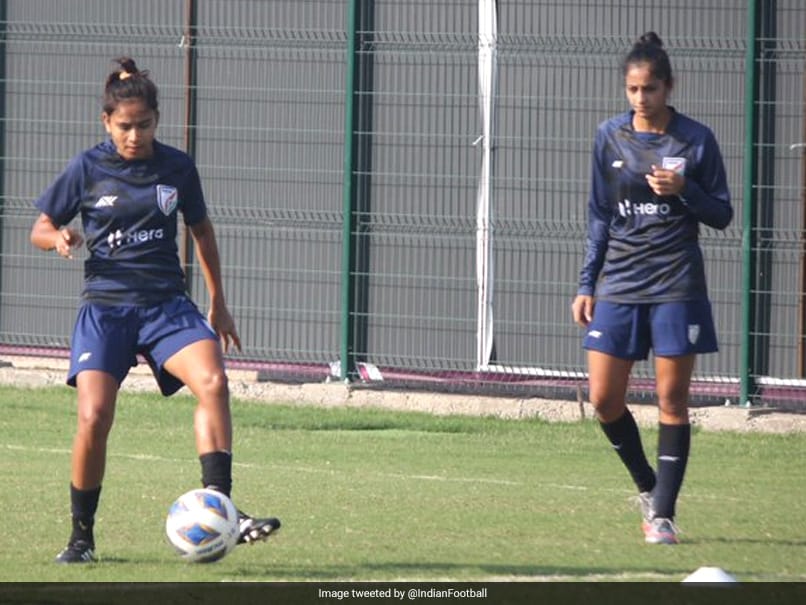 India players in training on Saturday ahead of the Women's Asian Cup clash against Chinese Taipei.© Twitter

Hosts India will need to be more clinical with their finishing when they face a struggling Chinese Taipei in a must-win group match of the women's Asian Cup in Navi Mumbai on Sunday. India were held to a goalless draw by lower-ranked Iran in their tournament opener, while Chinese Taipei were blanked 4-0 by eight-time champions China. A FIFA World Cup play-offs spot within their grasp, India are seeking to meet their head coach Thomas Dennerby's "realistic target" of making the quarterfinals, for which they will need to win the next match at all costs, as the home team is scheduled to play Group A heavyweights China in its last league fixture.

A win for India, which is hosting the continental showpiece for the second time after 1979, will virtually send the country into the quarterfinals of the 12-nation tournament.

Besides the two top teams, two third-placed sides across the three groups will also qualify for quarterfinals.

All the semi-finalists of the ongoing tournament will directly qualify for the 2023 FIFA World Cup in Australia and New Zealand. Two more teams from the remaining four quarterfinalists will also get direct berths to the World Cup if Australia make it to the semi-finals of this tournament, which is highly probable.

That means even the teams that lose in quarterfinals can directly qualify for the World Cup if they win the play-off matches of the AFC Asian Cup on February 2 and 4. The two losing quarterfinalists will feature in the Intercontinental play-offs.

Despite the COVID-19 pandemic, the Indian team had the luxury of a good number of exposure tours and international matches last year, including against former World Cup runners-up side Brazil and that kept the team in good stead against Iran, against whom they created plethora of chances but failed to convert.

On Sunday, they would be desperate to score their first goal of the marquee tournament.

Ahead of the match against Chinese Taipei, Dennerby said that his side needed "a few tweaks" to its attack.

"We have to work on our finishing and go at it again in the second match against Chinese Taipei and get the three points. I think we have a solid defence, defended well whenever they (Iran) counter-attacked.

"A few tweaks to our attack and we will be ready for our next opponents," the 62-year-old Swede said.

The hosts are playing without their star striker Bala Devi, who is recovering from a surgery, but they still dominated most of the 90 minutes against Iran.

For India, the experienced Aditi Chauhan, who made her 50th international appearance, is expected to don the goalkeeper's gloves again while skipper Ashalata Devi will marshal the deep defence.

Chauhan was able to keep a clean-sheet in the first game and is hoping for a similar outing.

The likes of Indumathi Kathiresan and Anju Tamang will man the midfield, while Manisha Kalyan, who scored India's lone goal against Brazil recently, can be expected to be India's trump card.

Manisha would also be very much eager to shrug off the disappointment of the last game and score the country's first goal in this edition of the premier competition.

Seasoned midfielder Kamala Devi did not get a chance in the last outing and it remains to be seen whether she gets an opportunity against Chinese Taipei.

Hammered by China in their first game, Chinese Taipei are ranked 39th in the world as against India's 55th, and they will have their task cut out against the hosts.

As far as past results are concerned, Chinese Taipei have a better head-to-head record, winning seven out of nine matches between the two nations.

However, the last time the two sides met India had emerged 1-0 winners in an international friendly at Hamad Town, Bahrain on October 13, 2021.

In the second game of the day, China will start as overwhelming favourites against Iran at the Mumbai Football Arena.

India
Get the latest updates on ICC Women's Cricket World Cup 2022 and IPL 2022, check out the Schedule , Live Score and IPL Points Table. Like us on Facebook or follow us on Twitter for more sports updates. You can also download the NDTV Cricket app for Android or iOS.