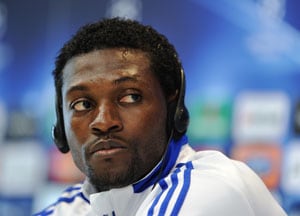 Adebayor, who is on loan at Real from Manchester City, had originally announced he was quitting the international scene in the wake of the deadly machine gun attack on his country's team coach on the eve of the 2010 Africa Cup of Nations in Angola.

The Togo team came under fire from rebels as it entered the restive Angolan enclave of Cabinda in an ambush that left two dead.

"I am still haunted by the events I witnessed on that horrible afternoon on the Togo team bus," Adebayor has said.

Togo had initially been barred from the next two editions of the biennial competition after withdrawing from the 2010 finals under pressure from their government.

But the tiny West African state was reinstated by the African Football Confederation last May after taking the matter to the Court of Arbitration for Sport.

Comments
Topics mentioned in this article
Football Emmanuel Adebayor Real Madrid
Get the latest updates on ICC T20 Worldcup 2022 and CWG 2022 check out the Schedule, Live Score and Medals Tally. Like us on Facebook or follow us on Twitter for more sports updates. You can also download the NDTV Cricket app for Android or iOS.