Adebayor makes himself available for Togo

Tottenham striker Emmanuel Adebayor has made himself available for selection by Togo, 18 months after he announced his retirement from international football. 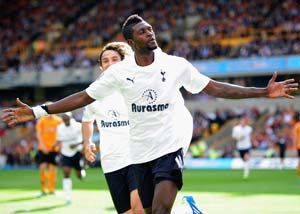 Tottenham striker Emmanuel Adebayor has made himself available for selection by Togo, 18 months after he announced his retirement from international football.

Togo's national football federation said that he would be available to play in his country's upcoming qualifying games for the 2013 Africa Cup of Nations and the 2014 World Cup.

"Mr Adebayor is hopeful that a new chapter is about to open for Togolese football and he has committed himself to play from the start in the qualifying games for these two competitions," a federation statement said.

The 27-year-old Adebayor called time on his international career in April 2010 saying that he was still haunted by the memory of the gun attack on the Togo team bus ahead of the 2010 Africa Cup of Nations in Angola which killed two members of Togo's delegation.

In another development, the Togolese federation announced that former French winger Didier Six would take over as team coach on a temporary basis for the two World Cup qualifiers against Guinea-Bissau later this month.

The side have been without a coach since another Frenchman, Thierry Froger, resigned in March following a mediocre qualifying campaign for the 2012 Africa Cup of Nations.

It will be the first time that the 57-year-old Six has taken over as coach of an African side.

Comments
Topics mentioned in this article
Emmanuel Adebayor Tottenham Hotspur Football
Get the latest updates on ICC Women's Cricket World Cup 2022 and IPL 2022, check out the Schedule , Live Score and IPL Points Table. Like us on Facebook or follow us on Twitter for more sports updates. You can also download the NDTV Cricket app for Android or iOS.