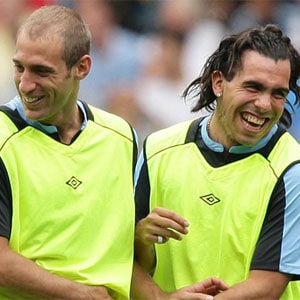 City have suspended Tevez pending a full investigation but Zabaleta insisted a hand of friendship had to be extended to his compatriot.

"We need to try to help Carlos," said Zabaleta. "He has been a really important player for us in the last two years but maybe this season he has had more games on the bench.

"Sometimes that is difficult, and more so for strikers, who need to play, need to score, need to feel confidence."

"Everybody always wants to play, maybe it's like that," Zabaleta said in trying to rationalise Tevez's behaviour - though the striker insists the whole incident was a misunderstanding.

"We need to accept that sometimes we are on the bench but we always have to be looking to get into the team," said Zabaleta, who also watched from the sidelines as City went down 2-0.

Fellow Argentine Sergio Aguero, a close friend of Tevez, regretted the falling out between the latter and the club.

"Carlos is a great player but obviously I am not inside his mind, to know his thoughts and opinions."