West Ham threatened first, Matt Taylor heading over from Carlton Cole's left-wing cross, before the hosts took a grip on the game. 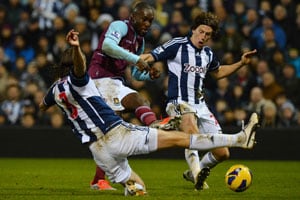 West Bromwich Albion and West Ham United both failed to reverse disappointing sequences of results after a 0-0 draw between the teams in the Premier League on Sunday.

West Brom midfielder James Morrison came closest to breaking the deadlock at The Hawthorns, twice striking the crossbar in the second half, as his side ended a run of three consecutive defeats.

The draw left Steve Clarke's men in sixth place, two points below the top four, while visitors West Ham lie 11th following a run of matches that has seen them pick up just five points from a possible 18.

West Ham threatened first, Matt Taylor heading over from Carlton Cole's left-wing cross, before the hosts took a grip on the game.

It was the visitors who created the better chances, however.

In the 32nd minute, Winston Reid volleyed over from barely five yards following a knock-down by James Collins, before a vicious strike by Cole had to be beaten away by West Brom goalkeeper Boaz Myhill.

If the first half had been a slow-burner, the second sprang to life immediately.

Scotland midfielder Morrison hooked the ball onto the West Ham crossbar with an improvised back-heel volley from a corner, before Gary O'Neil curled a glorious effort a whisker wide of the left-hand upright at the other end.

Jaaskelainen then saved from Zoltan Gera at the second attempt, before Joey O'Brien lifted Mark Noble's free-kick narrowly over the hosts' crossbar as the game opened up.

Morrison found the woodwork again in the 74th minute, rattling the bar with a header from Brunt's right-wing corner.