The home side were on the backfoot but managed to hold out for the draw against Roberto Martinez's men. 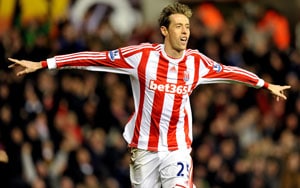 Wigan battled back from a two-goal deficit to snatch a 2-2 draw with Stoke and move out of the English Premier League relegation zone on Tuesday.

The Latics moved up to 17th in the table with 20 points, ahead of Aston Villa, who lost 2-1 to Newcastle, on points difference and one point ahead of Reading, who host Chelsea on Wednesday.

The draw saw Stoke, who have only won one of their last nine matches, stay in 10th spot on 30 points.

Ryan Shawcross opened the scoring for the home side, scrambling a goal in from a messy free-kick in the 23rd minute of a quiet, scrappy opening to the match.

Stoke increased their lead through the towering figure of Peter Crouch, the England striker finding the net in the 48th minute after a counter-attack and shot by Charlie Adam rebounds off Wigan's Omani 'keeper Ali al-Habsi.

But Wigan pulled one back under two minutes later in a great response, James McArthur curling in a shot from close range after he was played through.

And Franco Di Santo brought the score level with 20 minutes to play.

With Wigan rampant, Roger Espinoza sent up a cross which was headed back across goal by James McArthur, and Di Santo powered home a volley for the Latics.

The home side were on the backfoot but managed to hold out for the draw against Roberto Martinez's men.