Juan Mata scored the first goal of the Benitez era to put Chelsea ahead but former Chelsea youth-team player Carlton Cole equalised before Diame and Maiga struck to condemn the visitors to a seventh league game without victory. Chelsea have drawn twice and lost once since Benitez took over and they trail leaders Manchester United by seven points, having played a game more, while West Ham climb to seventh. 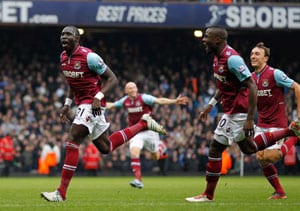 Rafael Benitez lamented Chelsea's profligacy in front of goal after his side's run of league games without a win was extended to seven following a 3-1 loss at West Ham United on Saturday.

In a true game of two halves, Chelsea led through Juan Mata's 13th-minute opener and looked comfortable until West Ham stormed back in the second half with goals from Carlton Cole, Mohamed Diame and Modibo Maiga.

Chelsea have not endured such a barren run in the Premier League since 1995, and Benitez has picked up just two points from a possible nine since replacing the sacked Roberto Di Matteo.

"To win, it's simple," Benitez said. "In the first half we just had to score more goals. We have to improve.

"We know that football has two halves, the game has two halves. In the first half we had two or three chances -- we just need to score more goals."

West Ham were transformed after manager Sam Allardyce introduced Diame and Matt Taylor at half-time and ultimately deserved victory for a vastly improved performance in the second period.

"We started okay but when they scored we just lost our confidence. I think we lost our momentum," said the West Ham coach.

"I just needed to make some changes, bring in some fresh legs. It was all about playing in the opposition's half, playing off Carlton Cole. I felt he was itching for a real good game."

Benitez made four changes to the side that started the 0-0 draw against Fulham, underlining the manager's pre-match assertion that the demands of the season are already beginning to tell on Chelsea's senior players. 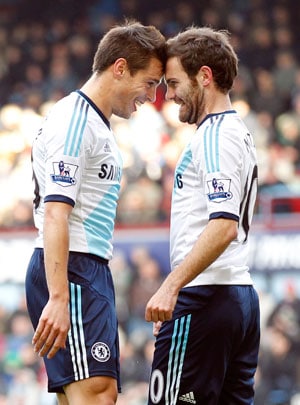 Mata, surprisingly held back on the bench in mid-week, returned in place of Ryan Bertrand, while Victor Moses and John Obi Mikel came in for Oscar and Oriol Romeu, and Gary Cahill stepped in for suspended centre-back David Luiz.

Allardyce was forced into changes of his own, after striker Andy Carroll was ruled out for two months with a knee injury picked up in the narrow mid-week defeat at Manchester United.

After the frustrations of Benitez's first few days in charge at Stamford Bridge, Chelsea desperately wanted to make a positive start.

And after surviving an early lapse when Winston Reid was allowed a free header in the Blues penalty area, they opened up the West Ham defence with ease to allow Mata to score the confidence-lifting opening goal.

The move was as simple as it was incisive, stemming from a throw-in on the half-way line.

Moses released Torres on the right-hand side of the West Ham area and the striker's cut-back found Mata, who finished side-footed from 12 yards.

The effect on Chelsea was tangible and Benitez's side began to press forward with a fluency that was noticeably absent during their previous two games.

Their failure to score meant West Ham remained in the game, but Allardyce's side appeared to be affected by the demands of a testing week that had seen them lose at Tottenham Hotspur and Old Trafford.

They had Jussi Jaaskelainen to thank for restricting Chelsea to a single-goal lead at half-time after the goalkeeper produced an excellent save to repel Mata's close-range shot.

Allardyce made two changes at half-time, introducing Diame and Taylor for James Tomkins and Gary O'Neil, and the changes had an immediate effect.

Immediately, Chelsea were pressed onto the back foot and forced to defend with increasing desperation.

But their back-line was broken when Cole out-jumped Branislav Ivanovic to head the home side level in the 63rd minute.

But the momentum was with West Ham and Allardyce's side went ahead in the 86th minute when Diame latched onto Cole's lay-off to drill the ball home.

And substitute Maiga sealed the points when he found the roof of the net after Taylor's shot had been parried by Cech.