Second-half goals from Mohamed Diame as well as substitutes Carlton Cole and Joe Cole did the damage for Sam Allardyce's men who move three points above the drop zone. 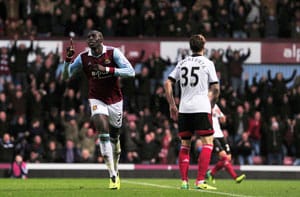 West Ham eased away from the relegation zone on Saturday and put Martin Jol's job as Fulham manager in jeopardy with a comfortable 3-0 win at Upton Park.

Second-half goals from Mohamed Diame as well as substitutes Carlton Cole and Joe Cole did the damage for Sam Allardyce's men who move three points above the drop zone.

Fulham meanwhile remain entrenched in the bottom three and with Jol suffering his ninth defeat in 13 matches, it will be debatable whether he will keep his position after another shocking display from the Cottagers.

West Ham broke a scoreless deadlock two minutes after half-time when French-born Senegalese international Diame let fly with a shot from outside the box that was cruelly deflected past Fulham's Dutch 'keeper Martin Stekelenburg.

Fulham midfielder Steve Sidwell was caught in possession in midfield while Jol will feel aggrieved that play wasn't stopped with Scott Parker down injured.

It was the first goal of the season for the 26-year-old Diame who arrived at Upton Park in 2012 after three seasons with Wigan and a prior spell in Spain with Rayo Vallecano.

After Ravel Morrison should have put West Ham further in front when he missed an open goal, his fellow substitute Carlton Cole showed the way with his seventh goal against Fulham.

He swept home Stuart Downing's cross with eight minutes remaining as the match slipped away from the Craven Cottage outfit.

His namesake Joe Cole then put the result well beyond doubt six minutes later after excellent work from the impressive Morrison as Allardyce saw two of his three substitutes get onto the scoresheet.

Fulham withstood a first half onslaught and went in at the break 0-0 after Modibo Maiga came closest for the home side when he crashed his header against the post following a Mark Noble free-kick from the right wing.

Comments
Topics mentioned in this article
Football Mark Hughes Alex Ferguson Fulham Middlesbrough Manchester City Chelsea Wigan Athletic English Premier League
Get the latest Cricket news, check out the India cricket schedule, Cricket live score . Like us on Facebook or follow us on Twitter for more sports updates. You can also download the NDTV Cricket app for Android or iOS.