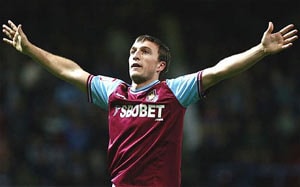 The Hammers have fared far better on their return to the top flight, despite the Saints finishing above them last season to take the second automatic promotion spot from the Championship.

After a dull first half, Mark Noble opened the scoring for West Ham in the 46th minute and Kevin Nolan added a second within two minutes.

Though Adam Lallana pulled one back for the visitors 63 minutes in, Noble scored his second from the penalty spot in the 72nd and late substitute Modibo Maiga completed the rout in the 87th minute.

The win left West Ham on 14 points, while struggling Southampton are in 17th place with just four points to show from their eight matches so far.

The first half was largely forgettable, with West Ham struggling to create chances and Southampton happy to make it to half-time without conceding for the first time since their top-flight comeback.

Sam Allardyce's team came out after the break firing on all cylinders. Noble struck with a 40-yard free kick that bounced in the six-yard box and beyond Boruc.

Within minutes, skipper Nolan had scored a second for the east Londoners. Japan defender Maya Yoshida lost the ball to Benayoun, who sent in a low cross to the far post where his captain tapped in.

Boruc had to be alert to keep out Nolan again in the 61st minute and the Saints pulled one back just two minutes later.

Adkins brought on Lambert but he was unable to bring the south coast side back on level terms, though fellow subsitute Emmanuel Mayuka threatened to do so twice, with a free kick that drifted over the crossbar and a header that went wide.

All Southampton's good work went to waste when Jose Fonte handled in the penalty box as he challenged England striker Andy Carroll.

Noble duly scored from the spot and the Hammers took it easy from then on.

Despite the Saints giving Jaaskelainen plenty to think about, Mali forward Maiga sealed the victory five minutes after coming on the pitch.

His charge at the Southampton defence ended with a curling, left foot finish.