Fernandinho's late own goal forced Manchester City to settle for a 2-2 draw against Crystal Palace, while Tottenham were held to a goalless draw by Watford. 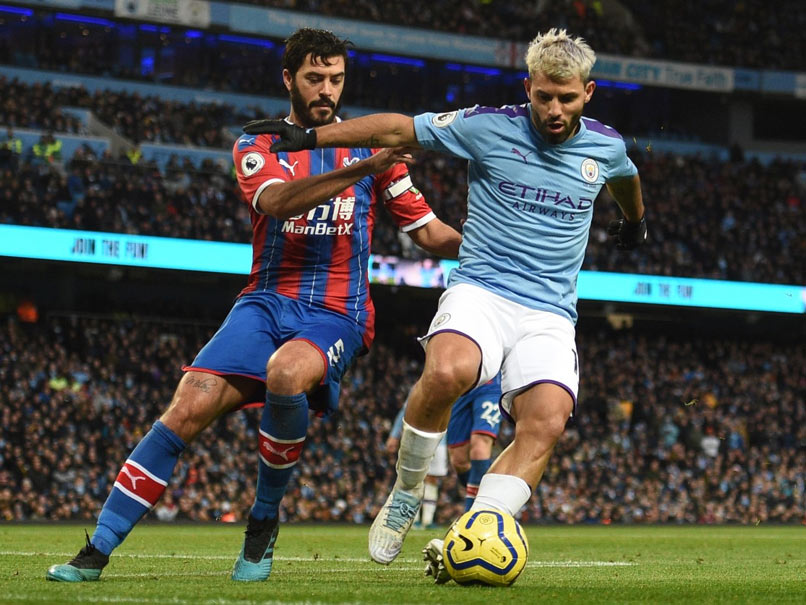 Sergio Aguero's two goals in five minutes appeared to have turned the game on its head.© AFP

Pep Guardiola's 49th birthday celebrations went flat as Fernandinho's late own goal forced Manchester City to settle for a 2-2 draw against Crystal Palace, while Tottenham's hopes of finishing in the top four were dented by a goalless stalemate at Watford on Saturday. On a busy day of top-flight action, the pitchside VAR monitor was used in the Premier League for the first time at Norwich and Arsenal were held to a 1-1 draw by Sheffield United.

It was the drama at the Etihad Stadium that took the spotlight as Fernandinho's last-gasp blunder left Guardiola in no mood to party after City's faint hopes of retaining the title suffered another hammer blow.

The champions trail Liverpool by 13 points ahead of the runaway leaders' clash with rivals Manchester United on Sunday.

"It was a tight game. It's difficult to analyse when they shoot from one corner and have no more chances," Guardiola said.

"I told them to put more balls into the box and try to control Zaha on the counter-attack. We had many chances, unfortunately we could not win."

Cenk Tosun marked his first league start since his loan move from Everton with his maiden goal for the Eagles, the Turkish striker netting a close-range strike from Martin Kelly's flick in the 39th minute.

Sergio Aguero appeared to have turned the game on its head in the 82nd minute when the Argentine striker bagged his 250th goal in 360 games for the club.

Aguero put City ahead in the 87th minute with a typically predatory header from Benjamin Mendy's cross.

But there was a sting in the tale for Guardiola as Fernandinho turned Wilfried Zaha's cross into his own net in the 90th minute to end second-placed City's run of three successive league wins.

Jose Mourinho's side are without a win in four league matches since December 26 and sit eight points behind fourth-placed Chelsea, who visit Newcastle in Saturday's late game.

Toothless Tottenham thought they had stolen the points in stoppage-time when Lamela flicked Serge Aurier's cross towards goal, but Watford's new signing Pussetto cleared off the line, with goal-line technology showing just 10.04mm of the ball had not gone over.

"I know it was only a couple of millimetres but goal-line technology does not make mistakes like VAR. We have to accept it was not a goal," Mourinho said.

Arsenal are 10 points adrift of the top four after the Blades continued their superb first season back in the Premier League.

Gabriel Martinelli broke the deadlock in first-half stoppage-time at the Emirates Stadium.

The 18-year-old Brazilian striker claimed his ninth goal of the season with a clinical finish from Bukayo Saka's cross.

But Chris Wilder's side snatched an 83rd-minute equaliser when John Fleck lashed home after Arsenal failed to clear.

Norwich took the lead when Bournemouth defender Steve Cook was sent off after flinging himself across the goal to block Teemu Pukki's shot with his hand.

Pukki fired home the resulting penalty in the 33rd minute, but the Canaries had to survive a tense finish after Ben Godfrey was sent off in the 76th minute.

Godfrey's foul on Callum Wilson was ruled a red card by referee Paul Tierney after he checked with the monitor, a move that followed advice to officials from Premier League chiefs this week to use the screen more often.

Wolves climbed to sixth after a thrilling fightback in their 3-2 win at Southampton, with Pedro Neto starting a second-half revival that saw Raul Jimenez's brace seal the points.

Everton drew 1-1 at West Ham after Dominic Calvert-Lewin cancelled out Issa Diop's opener for the hosts.

Aston Villa's Jack Grealish rescued a 1-1 draw at Brighton, who had taken the lead through Leandro Trossard.

Sergio Aguero Fernandinho
Get the latest updates on IPL Auction 2023 and check out  IPL 2023 and Live Cricket Score. Like us on Facebook or follow us on Twitter for more sports updates. You can also download the NDTV Cricket app for Android or iOS.