VAR is in the spotlight again after West Ham were condemned to defeat following a last-minute contentious handball decision at Bramall Lane. 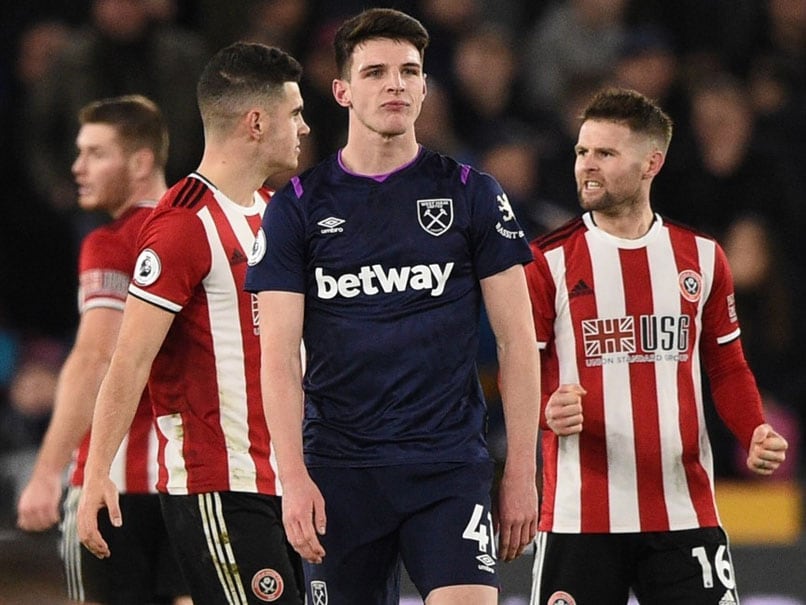 Declan Rice was furious with the decision and VAR's influence on the Premier League this season.© AFP

West Ham United midfielder Declan Rice has claimed that "every Premier League player" wants the use of Video Assistant Referee (VAR) removed after another controversy erupted following a contentious handball decision at Bramall Lane on Friday night. During the Sheffield United vs West Ham Premier League clash, the VAR was called into action in stoppage-time of the game when Robert Snodgrass fired home Declan from Rice's pass. However, the goal was checked by VAR and eventually ruled out for a handball by Declan Rice in the build-up to the goal.

The England international was furious with the decision and VAR's continual influence on the Premier League this season, saying "all the lads are livid".

"We are fuming. All the lads are livid. I've just watched it back. He has knocked the ball into my hand. If you are running with your arms like that with the rules as they are now it is handball but it is not intentional. It is a kick in the teeth," Rice said.

"I think it is the thoughts of every Premier League player, not just me, pretty much every one doesn't want to have VAR in the game.

"There have been so many decisions this season that have been absolutely crazy. They were celebrating VAR like it was a goal and football should not be like that."

Watch the controversial incident for yourself:

Some fans on social media, including a few former players, also vented their frustration with many pointing at previous incidents where VAR has created controversy.

THIS WENT ON TO BE A GOAL AND WASNT DISALLOWED.

BUT DECLAN RICE GOT THE BALL HEADED AT HIS HAND FROM 3cm AWAY AND WE GOT A GOAL DISALLOWED. @_DeclanRice @premierleague pic.twitter.com/cl8V3tNj6J

Look at that bottom paragraph, thats exactly what happened tonight, and thats from the PL website, what rule book do the officials have? Its just a jokepic.twitter.com/jby6pCI4UM

Declan Rice Saying how the rest of us feel. pic.twitter.com/mI2a86KoHu

Get VAR out of football. The game I love is slowly dying like, how the hell did they thought Declan Rice handballed it when the ball gets headed towards his arm and he didn't handball it. Football is a finished sport, the game is starting to piss me the fuck off.

What a joke VAR it's disgusting it really is, Rice can do nothing about that whatsoever totally ruined the premier league. It's honestly disgusting how fans have to put up with this #SHUWHU

West Ham sit just two points above the relegation zone and West Ham manager David Moyes, who looked stunned when the VAR decision was made, insisted the goal should have been allowed.

"We're disappointed. We scored a good goal and it didn't count. The defender got his head to it and headed against Declan," Moyes said.

"Whoever checked it I think got it wrong because it was a really good bit of play by Declan, where'd you put your hands, tie them behind your back?

"It doesn't change my view. I'm a football man, watched and played it all my life and it looked good enough to me.

"I wouldn't say I'm a great fan of VAR but we are having to come to terms with it. People who have played football know when it's not right and tonight is one of those situations."

West Ham United Sheffield United English Premier League Football
Get the latest updates on ICC T20 Worldcup 2022 and CWG 2022 check out the Schedule, Live Score and Medals Tally. Like us on Facebook or follow us on Twitter for more sports updates. You can also download the NDTV Cricket app for Android or iOS.