The shipwreck hunter hired by Emiliano Sala's family with the help of funds donated by football stars such as Lionel Messi found the plane wreckage on Sunday. 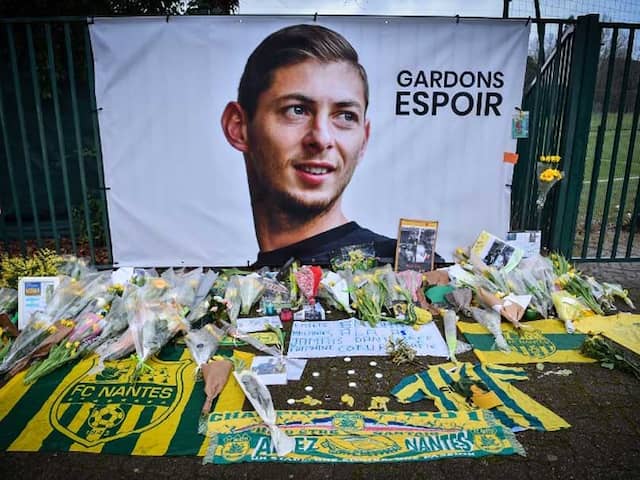 Emiliano Sala was flying to join up with Cardiff from his old French team Nantes.© AFP

British crash investigators on Tuesday launched an underwater operation to recover a body from the wreckage of the plane carrying Argentine footballer Emiliano Sala in the Channel. "We are attempting to recover the body. If we are successful, we will consider the feasibility of recovering the aircraft wreckage," an Air Accidents Investigation Branch (AAIB) spokesperson said in a statement.

The light aircraft carrying the 28-year-old footballer and pilot David Ibbotson to his new Premier League team Cardiff City disappeared near the British island of Guernsey on January 21.

The shipwreck hunter hired by Sala's family with the help of funds donated by football stars such as Lionel Messi found the plane wreckage on Sunday.

The AAIB has since taken over operations. It revealed on Monday that an unidentified body had been found at the site.

But it warned on Tuesday that strong tides "mean we can only use the remotely operated vehicle (ROV) for limited periods each day".

"Regardless of the results, we will not be making a further statement until the families have been informed," it said.

Shipwreck hunter David Mearns had earlier warned that "time is of the essence" in an underwater operation like the one being launched by Britain off France's northern coast.

"As tragic as the loss is, it's made much, much worse if the body is never recovered or (the family) never get an answer to what happened," Mearns said.

"Finding it is just the starting point. The AAIB has got to investigate it."

Sala was flying to join up with Cardiff from his old French team Nantes.

His signing was the most expensive in the Welsh club's history and marked what fans had hoped would be a turning point in its bid to avoid relegation from England's top division.

"There's no longer any hope," Horacio Sala, Emiliano's father, told Fox Sports, acknowledging there was no longer any prospect of finding his son alive.

"We hope the two bodies are inside (the plane). It's over, the only thing I hope now is that they find them."

Mearns said his discovery of two seat cushions on the French coast last week revealed that the plane had broken up.

"It's in one area (on the seabed), it's all one mass, but some bits may not be connected. So what you don't want to do is to disturb the body in a way that you lose it," he said.

"Had that not happened, I don't think anybody would have searched for the plane," Mearns said.

"We were told by the AAIB that they didn't feel that there was much to be gained," he said.

The AAIB ended up chartering a ship to join Mearns on Sunday.

He said recovery was now "technically possible -- the water depth isn't an issue really, and the weather can be managed with the right ship".

Lionel Messi English Premier League
Get the latest Cricket news, check out the India cricket schedule, Cricket live score . Like us on Facebook or follow us on Twitter for more sports updates. You can also download the NDTV Cricket app for Android or iOS.