Mauricio Pochettino insisted prior to the game that he remained sure Spurs' quality will eventually shine through this season. 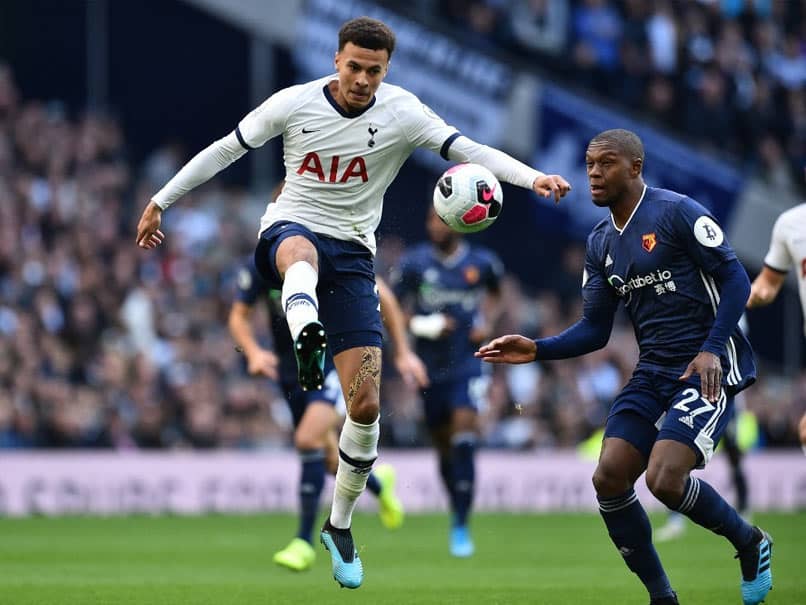 Dele Alli struck four minutes from time to prevent Tottenham suffering another demoralising Premier League defeat, but their struggles continued in a 1-1 draw with bottom-of-the-table Watford on Saturday. The Hornets have still not won in the league since April and will rue a series of missed chances after Abdoulaye Doucoure put them in front after just six minutes. Spurs seemed set for a third straight defeat after humiliating heavy losses to Bayern Munich and Brighton before the international break.

But a mix-up between Ben Foster and Kiko Femenia handed Alli an equaliser to at least salvage a point for last season's Champions League finalists.

Mauricio Pochettino insisted prior to the game that he remained sure Spurs' quality will eventually shine through this season.

But once again the Argentine again failed to rouse a response from his side as doubts over his ability to turn the tide in his sixth season in charge grow.

Tottenham have now won just three of their first 12 games in all competitions and, just like at Brighton a fortnight ago, they paid a heavy price for a slow start.

The match had barely started before Watford were forced into a substitution when Danny Welbeck hobbled off to be replaced by Gerard Deulofeu.

And Spurs were caught napping when play got back underway as Daryl Janmaat got in behind Danny Rose and crossed for Doucoure to apply the finish.

After his exertions in a World Cup qualifier in North Korea for South Korea in midweek, Pochettino left Son Heung-min and club-record signing Tanguy Ndombele on the bench.

But Son's spark was badly missed from an impotent Spurs before the break.

Indeed the hosts were fortunate to be just 1-0 down at half-time as Jan Vertonghen somehow escaped conceding a penalty for bringing down Deulofeu despite a VAR review.

Son was introduced for Davinson Sanchez at the break as Pochettino switched formation and he instantly offered more pace and directness to the Spurs' attack.

His powerful drive from a narrow angle was tipped onto the bar by Foster on 50 minutes.

But in Tottenham's search for an equaliser they were leaving huge gaps for the visitors to exploit on the counter-attack and Quique Sanchez Flores's men lived to regret not at least doubling their advantage.

Doucoure then eased through the Spurs midfield before setting up Janmaat, who miscued his shot with the goal gaping.

Just as Tottenham seemed to be running out of ideas, Watford gifted them an equaliser when Foster collided with his own defender in Femenia and spilled the ball into the path of Alli, who swept the ball into an empty net for his first goal since January.

The visitors were infuriated as VAR checked the goal for a potential handball by Alli, but not a push by Harry Kane in the build-up.

Watford did at least withstand a late flurry from Tottenham to secure a point, but they remain rooted to the foot of the table.

Watford English Premier League Football
Get the latest updates on India vs Australia Series, check out the India vs Australia Schedule for 2020-21 and Ind vs Aus live score . Like us on Facebook or follow us on Twitter for more sports updates. You can also download the NDTV Cricket app for Android or iOS.