Juan Mata's decisive strike at Manchester United at the weekend means Chelsea can all but guarantee Champions League qualification by beating fifth-place Tottenham Hotspur at home on Wednesday. 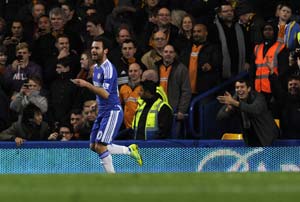 Juan Mata's decisive strike at Manchester United at the weekend means Chelsea can all but guarantee Champions League qualification by beating fifth-place Tottenham Hotspur at home on Wednesday.

The Stamford Bridge showdown looked destined to be a straight shootout for a top-four place until Mata struck with three minutes remaining at Old Trafford on Sunday to give Chelsea a precious 1-0 victory.

The Spaniard's goal, via a telling deflection off Phil Jones, lifted Chelsea three points above Spurs and means they will be virtually guaranteed a place in next season's Champions League if they defeat their London rivals.

The win over United was Chelsea's 65th game of the season, but with Champions League qualification at stake and a Europa League final against Benfica still to come, Mata says there is simply not enough time for mental fatigue to creep in.

"Three points here (at Old Trafford) is amazing, because now we are in third position. If we win against Tottenham we will be in the Champions League," he said following Sunday's match.

"Mentally you don't have time to disconnect. We play Sunday, Wednesday, Saturday, so mentally you are always focused.

"We need to rest, to train and get ready. We want and need to win against Tottenham."

Had Mata and his team-mates failed to overcome United, Spurs would have travelled to west London knowing that victory would have taken them into the Champions League places at Chelsea's expense.

In any case, Spurs must win to take up a place in the top four.

Victory would come with the added satisfaction of knocking eternal rivals Arsenal out of the Champions League qualifying berths, but Tottenham have not won at Stamford Bridge since February 1990 -- a run of 25 matches.

Their momentum has also slowed of late with just two wins in six games prior to Saturday's 1-0 defeat of Southampton, which was only secured in the 86th minute through another stunning goal from man of the season Gareth Bale.

Wednesday's game will mark manager Andre Villas-Boas's first trip to Chelsea since he was sacked by the club in March last year, but he says he has not given much thought to the emotional implications of his return.

"I'm not sure (what it will be like)," said the Portuguese, who also worked at Stamford Bridge as a member of former manager Jose Mourinho's backroom staff.

"I'm not sure if enough time has passed for me to feel anything. I was just another manager that passed by.

"Obviously I spent three great years there when I was on the staff but when I was given more responsibility, I wasn't given enough time.

"I have great friends who I don't want to undermine by what I am saying and the players gave everything for me.

"It's fine because sometimes the only option is for a manager to go and I have discussed this at length.

"It would be excellent if we got the three points. At the moment it means absolutely nothing; it's just another opponent in our quest to try to get the nine points that we have to play for."

Spurs are expected to confirm on Tuesday whether midfield trio Scott Parker, Mousa Dembele and Aaron Lennon will be fit to play a part at Stamford Bridge.

Parker missed the Southampton game after injuring his ankle in training, while Lennon and Dembele both had to come off during the match due to muscle problems.

Chelsea, meanwhile, hope Belgian attacking midfielder Eden Hazard will be able to feature after he sat out the trip to Old Trafford with a calf complaint.

"I think he could be available, but it is not easy to say now," said interim manager Rafael Benitez. "The physios are working with him, so we will see."

Benitez may also hand starting roles to captain John Terry and Fernando Torres, both of whom occupied the bench at the weekend.

Comments
Topics mentioned in this article
Football Manchester City Chelsea Tottenham Hotspur Mark Hughes Juan Mata Alex Ferguson English Premier League
Get the latest updates on ICC T20 Worldcup 2022 and CWG 2022 check out the Schedule, Live Score and Medals Tally. Like us on Facebook or follow us on Twitter for more sports updates. You can also download the NDTV Cricket app for Android or iOS.