Son Heung-min suffered the injury in the 3-2 Premier League victory over Aston Villa -- in which he scored twice including the late winner -- on Sunday. 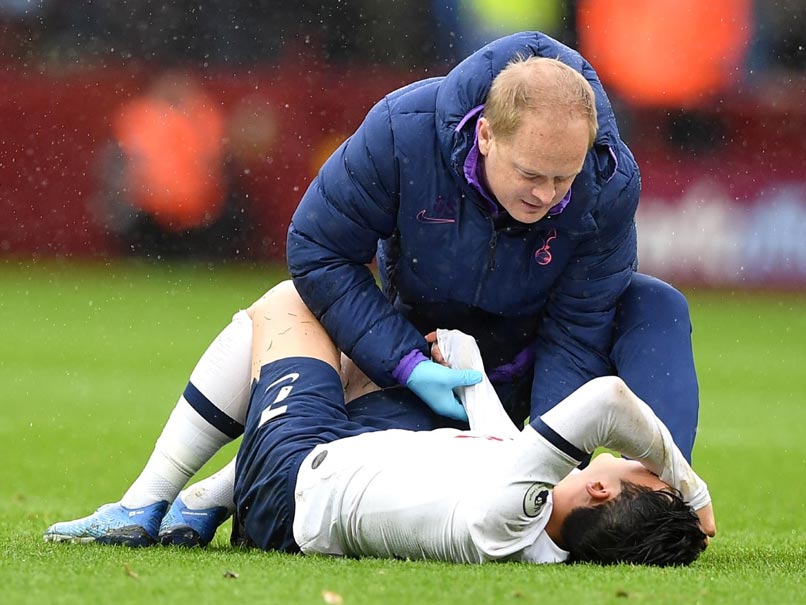 Tottenham Hotspur's hopes of obtaining something from the season have been equated to someone hanging on for dear life from a balcony in a typically colourful analogy by their manager Jose Mourinho. The 57-year-old Portuguese made the comparison after he said he believed Korean star Son Heung-min's season could well be over due to a fractured right arm.

Mourinho is already without star striker Harry Kane -- side-lined since January with a torn hamstring -- as the club enters a crucial period. Midfielder Moussa Sissoko is another long-term casualty.

Spurs host German side RB Leipzig in a Champions League Last 16 first leg match on Wednesday and play Chelsea in a match that could prove pivotal in the dog-fight for the fourth and final Champions League spot.

"You know I like analogies," said Mourinho, who took over after Mauricio Pochettino was sacked in late November last year.

"Sometimes I do good ones and sometimes silly ones. This time I do this.

"When we arrived we were in minus 12 floor, we got on the stairs and we started climbing.

"But immediately the stairs broke and trouble.

"We were trying to find a way.

"Lots of effort but we were going and going.

"Then 11th floor and when we arrived on the fourth floor, where we wanted to arrive, someone took the stairs away so we are now in trouble.

"We are holding by our arms on the balcony."

Mourinho said the club were at a crossroads in their season.

"Now we have two options," he said.

"To fall and die because it's the fourth floor.

"The other is to climb. We will be on that balcony fighting with everything we have."

Son's absence comes as a cruel blow to the player and the team as he had been in a rich vein of form scoring in the last five matches after filling in for Kane up front.

The 27-year-old South Korean international forward suffered the injury in the 3-2 Premier League victory over Aston Villa -- in which he scored twice including the late winner -- on Sunday.

Son suffered the injury in a robust first-minute challenge from Villa's Ezri Konsa.

The club did not specify how long Son would be out -- he is due to undergo surgery this week -- but Mourinho was pessimistic.

"I'm not going to count on him again this season," Mourinho said.

The club said only after the medical operation would they be able to say how long he would be absent.

"Following surgery, our medical staff shall be reviewing management options for Son's rehabilitation with the player expected to be sidelined for a number of weeks."

Mourinho said he would have phrased the statement differently.

"The club wrote a nice statement," he said.

"If I was the one to write the statement I would write different. We miss him," added the 57-year-old Portuguese.

With both Kane and Son missing, Lucas Moura looks like having the burden placed on him as Mourinho discounted untested Irish youngster Troy Parrott.

"My thoughts are that Troy Parrott is not ready and Ryan Sessegnon is not a striker."

Son Heungmin English Premier League Football
Get the latest updates on India vs South Africa and check out  Schedule, Results and Live Score. Like us on Facebook or follow us on Twitter for more sports updates. You can also download the NDTV Cricket app for Android or iOS.