Roberto Soldado added a second after half-time as Spurs moved up to fifth place in the table, three points below leaders Arsenal, and began to atone for their shock 3-0 home defeat by West Ham United. 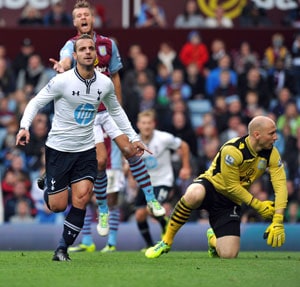 England breakthrough star Andros Townsend continued his fine form by inspiring Tottenham Hotspur to a 2-0 win at Aston Villa in the Premier League on Sunday.

The 22-year-old winger, who starred as England booked their place at the World Cup earlier this week, scored the opening goal with a 31st-minute cross that crept past Villa goalkeeper Brad Guzan.

Roberto Soldado added a second after half-time as Spurs moved up to fifth place in the table, three points below leaders Arsenal, and began to atone for their shock 3-0 home defeat by West Ham United.

It was a first defeat in four league games for Paul Lambert's Villa, who now find themselves 13th, but it was a marked improvement on their 4-0 capitulation to the same side in the League Cup last month.

Villa had last season's top scorer Christian Benteke on the bench following a hip injury, with Nathan Baker replacing Ciaran Clark in the only change to the side that drew 0-0 at Hull City last time out.

Villa forward Gabriel Agbonlahor put a half-volley over the bar from an early Leandro Bacuna cross, but heavy rain made for a slippery surface and the game suffered as a result.

Sandro shot straight at Brad Guzan from 30 yards and Spurs goalkeeper Hugo Lloris had to scramble away a free-kick from Ashley Westwood, before the visitors made the breakthrough.

Townsend claimed the goal, but it owed to a certain degree of fortune.

Picking up the ball wide on the right, he cut onto his left foot and attempted to pick out a team-mate in the centre, but his cross eluded both Holtby and Soldado, only to sneak in at the far post.

There was an unsavoury incident in the aftermath of the goal when assistant referee David Bryan was struck by a flare apparently thrown from the Spurs supporters' section, but after a brief delay, play continued.

Andreas Weimann flashed a shot just wide as Villa pushed for an equaliser, but Spurs came close to going 2-0 up in first-half stoppage time when Guzan produced a smart low stop to thwart Townsend.

Another fine save from the American prevented Paulinho from doubling the visitors' advantage early in the second period and the introduction of Benteke gave Villa further reason for optimism.

The burly Belgian planted a header from a Bacuna cross narrowly over the bar shortly after coming on, but five minutes later, Spurs struck again.

Paulinho's intelligent first-time pass freed Soldado and the Spain striker took a touch before lifting the ball over Guzan to claim his third league goal in a Spurs shirt.

Villa's fight faded, but Townsend refused to leave them in peace.

He dispatched a curler that cleared the crossbar by millimetres and then flashed a ball across the face of goal that Paulinho was unable to convert. After the best week of his fledgling career, the man-of-the-match award came as no surprise.