Sergio Aguero justified Roberto Mancini's decision to haul off Mario Balotelli as the Manchester City striker came on to score the crucial goal in his side's 3-0 win over Sunderland on Saturday. 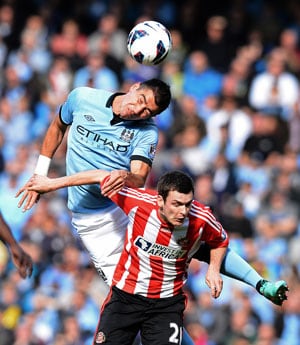 Sergio Aguero justified Roberto Mancini's decision to haul off Mario Balotelli as the Manchester City striker came on to score the crucial goal in his side's 3-0 win over Sunderland on Saturday.

Argentina star Aguero was introduced by City boss Mancini as a 55th minute replacement for Balotelli, much to the disapproval of the controversial Italian, who took an age to saunter off the field and headed straight down the tunnel, rather than taking his position next to Mancini on the City bench.

However, within five minutes, Aguero had scored for City, adding to an early goal from Aleksandar Kolarov, and leaving the outcome of the contest at Eastlands in no doubt.

There was still time for James Milner to add a late third goal for City, who won for just the second time in seven games in all competitions and kept their first cleansheet of the season at the 10th attempt.

After Wednesday's 1-1 draw against Borussia Dortmund in the Champions League added to their recent struggles, this was a far more emphatic performance from the Premier League champions.

Sunderland defender Carlos Cuellar helped their cause in the fifth minute with a terribly-timed, scything challenge on Carlos Tevez that gifted City a free-kick on the corner of the penalty area.

Serbian defender Kolarov punished the infringement from the set-piece, curling an unstoppable left-footed free-kick past Simon Mignolet for his third goal in four City games.

That was the springboard for an easy afternoon for City.

Balotelli shot over from 22 yards before Tevez's shot was blocked by Mignolet with Pablo Zabaleta's follow-up save drawing a fine stop from the Sunderland goalkeeper.

The best chance of a second goal seemed to come from a high boot by Gardner which caught Balotelli in the face after 24 minutes, presenting Kolarov with another convertable free-kick although, this time, the Serbian saw his effort strike Seb Larsson.

Sunderland forced Joe Hart into his first meaningful action in the City goal, after 38 minutes, with the England keeper comfortably stopping a deflected Steven Fletcher shot.

The half ended with City again threatening, with Gareth Barry's 20-yard shot, after good approach play from Milner and David Silva, whistling past the post.

Fletcher, the only player to have scored in the league for Sunderland this season, opened the second period with a first-time volley which struck his marker Micah Richards without troubling Hart.

And City were quickly back in control as Barry's pass found Silva whose back heel, in turn, played in Yaya Toure for a thunderous shot which Mignolet did well to parry.

The champions maintained the pressure as a Milner cross was met by Richards who, having seen his header blocked, followed up with a goal-bound shot that Sunderland full-back Danny Rose cleared off the line.

Balotelli, with his final act before being replaced, slid in but failed to connect with a Kolarov cross and Richards' powerful header from a Milner corner forced Mignolet into an acrobatic leaping catch.

On the hour, however, the newly-arrived Aguero appeared at the near post to meet an accurate Kolarov cross and comfortably applied a lethal finish, forcing the ball in from six yards.

It was not until the final minute of the game that City's complete control was underlined after a foul by Craig Gardner on Kolarov just outside the area.

England international Milner took the free-kick, wide on the edge of the penalty box, and drove a strong shot past Mignolet via a deflection off Gardner.

Comments
Topics mentioned in this article
James Milner Football Sunderland Manchester City Alex Ferguson Mark Hughes Aleksandar Kolarov English Premier League
Get the latest Cricket news, check out the India cricket schedule, Cricket live score . Like us on Facebook or follow us on Twitter for more sports updates. You can also download the NDTV Cricket app for Android or iOS.