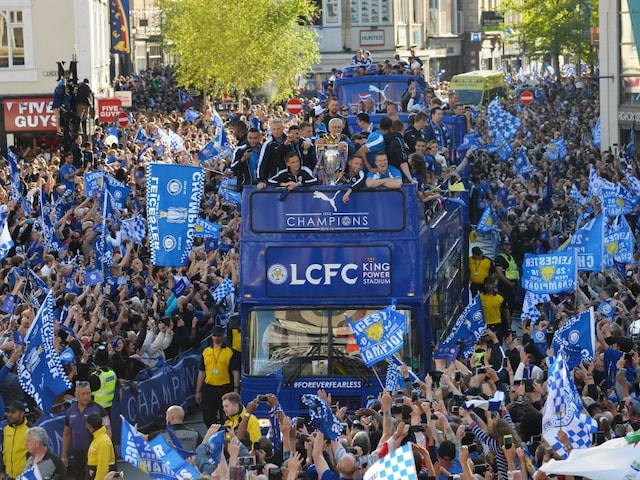 Leicester City's incredible Premier League fairytale reached a joyous crescendo as around 240,000 fans turned the city blue while revelling in the club's title parade on Monday.

For two weeks since Claudio Ranieri's side were crowned one of the most unlikely champions in English football history, the city of Leicester hasn't stop celebrating and the party climaxed beneath sunny skies 24 hours after the Foxes finished their campaign with a draw at Chelsea.

After starting the season as 5,000-1 outsiders for the title, Leicester defied the odds in stunning fashion and being hailed by a crowd estimated by the local council at nearly a quarter of a million was a fitting finale for Ranieri's squad and the club's Thai chairman Vichai Srivaddhanaprabha, who soaked up the celebrations with his family.

"The city is here. It's something special," Ranieri said.

"This is because the team played with their soul and their hearts. The people understood this.

"It's unbelievable. I can only say thank you to the people."

Fans began congregating hours before the scheduled 1700 GMT start of the parade as they packed streets along the route and massed at Victoria Park, where cheerleaders and a gospel choir provided the entertainment on a stage set up to welcome the players at the end of the parade.

Thousands of the partying hoards came decked out in the team's blue home shirts, while hundreds of blue and white flags were waved by children with their faces painted in the club colours.

With the streets so tightly packed, some brave fans clambered onto rooftops to get a better view and others hung out of windows to salute their heroes.

Placards with images of King Richard III's head edited to fit a Leicester strip bobbed above the crowd.

The re-burial of the king in 2015 was the last time the city witnessed anything approaching these scenes, with some speculating the former monarch may have been a lucky charm for the team.

Leicester's astonishing success, just a year after they narrowly avoided relegation, had captivated sports fans across the world and one group travelled all the way from Australia to join the celebrations.

The crowd also included a party of students from Thailand, who are studying English at Leicester's De Montfort University.

Chaiya Noradechanunt, 48, said: "This is fantastic. I always watch the matches in Thailand. Leicester are very popular."

Many supporters hadn't quite come to terms with the magnitude of Leicester winning the first title in the club's 132-year history, but it wasn't going to stop them celebrating in style.

"My lad lives in Manchester and he asked me if Leicester would ever win the Premier League and I said 'not in my lifetime'," one fan told AFP.

"So I am extremely amazed and extremely pleased. It's a wonderful achievement both for the club and for the city."

The first sightings of the blue open-top buses carrying the Leicester squad drew roars of delight from the ecstatic crowd, some of whom had been entertained by Ranieri and star striker Jamie Vardy pretending to ride on the police bikes that were escorting them through the city.

Captain Wes Morgan and his teammates, including Japan striker Shinji Okazaki and Algeria winger Riyad Mahrez, took turns holding the trophy on the top deck of one bus as England international Vardy said: "It's brilliant. Look at the scenes. It's carnage."

Once the bus reached its destination in Victoria Park, the raucous atmosphere was cranked up to the levels of a rock festival as players were interviewed while big screens showed Leicester goals from the season.

Leicester-based band Kasabian made a surprise appearance to play some of their hit songs as the party went on long into the night.

Aiyawatt Srivaddhanaprabha, son of Vichai, was close to tears as he made his way onto the stage to tell the crowd: "I think we need a bigger stadium.

"You have been amazing and I hope we keep the support next season."

Comments
Topics mentioned in this article
Leicester City Jamie Vardy Wes Morgan Riyad Mahrez English Premier League Football
Get the latest Cricket news, check out the India cricket schedule, Cricket live score . Like us on Facebook or follow us on Twitter for more sports updates. You can also download the NDTV Cricket app for Android or iOS.