Fredrik Ljungberg, Dwight Yorke and Louis Saha are among other foreign players in the fray for the franchise-based event organised by the All India Football Federation (AIFF) and its commercial partners IMG-Reliance. 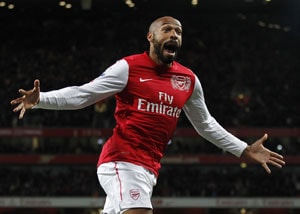 Former football superstars Thierry Henry, Robert Pires and Hernan Crespo are being lined up to play in a new Indian tournament aimed at cashing in on growing domestic interest in the sport, organisers said Monday.

Fredrik Ljungberg, Dwight Yorke and Louis Saha are among other foreign players in the fray for the franchise-based event organised by the All India Football Federation (AIFF) and its commercial partners IMG-Reliance.

The Indian Super League is scheduled to be held between January and March across India and feature eight city teams whose squads will comprise nine foreign and 13 Indian players.

"The idea of the league is to revolutionise Indian football," said a spokesman for IMG-Reliance, a joint venture between global events management group IMG and Indian conglomerate Reliance.

"The Indian youth follows a lot of European football. So we definitely want to bring in their expertise, experience and fan following," the spokesman told AFP.

Yorke, Saha, Ljungberg, Pires and Crespo had been confirmed to play, the spokesman said, adding that Henry "could be a potential".

The format will steal extensively from India's top limited-overs cricket tournament, which has been copied in other sports including badminton and hockey.

Top businessmen have been invited to buy the new football clubs and take part in players' auctions which will be held next month.

Among the nine cities in line to grab the eight teams are Mumbai, Delhi, Kolkata, Chennai, Kochi, Guwahati, Goa, Bangalore and Pune.

The made-for-television event, to be broadcast by the Rupert Murdoch-owned Star TV network, has already run into trouble over fierce opposition from India's top clubs.

The clubs have declined to release their players for the tournament, saying it will threaten their existence and ruin the national I-League domestic competition.

India, ranked a lowly 154th in the world and 28th in Asia, has seen a surge in football's popularity due to live television coverage of matches played around the globe.

Comments
Topics mentioned in this article
Football Indian Premier League 2012 Arsenal France Real Madrid English Premier League
Get the latest updates on IPL Auction 2023 and check out  IPL 2023 and Live Cricket Score. Like us on Facebook or follow us on Twitter for more sports updates. You can also download the NDTV Cricket app for Android or iOS.