Lampard's contract expires at the end of the season, and there are no signs he will be offered a new deal. 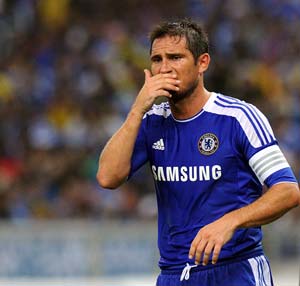 Chelsea captain John Terry said he is "devastated" at the prospect of veteran midfielder Frank Lampard leaving the club.

The 34-year-old Lampard's contract expires at the end of the season, and there are no signs he will be offered a new deal.

"Devastated is an understatement," Terry wrote Friday on his Instagram social networking account. "We should retire the number 8 shirt in honour of Lamps."

Lampard has won every major trophy alongside Terry since joining Chelsea from West Ham in 2001.

Below a picture of them lifting the FA Cup in May, Terry added a series of tributes on Instagram to Lampard, including "theheartbeat" ''legend" and "goal machine."

Lampard has scored three goals in his past four matches to make him Chelsea's third-highest scorer in history.

Terry later claimed he was only reacting to comments attributed online Thursday to Lampard's agent, who has since denied providing quotes confirming his client would be leaving Chelsea at the end of the season.

"I have seen franks agents quotes on sky yesterday," Terry wrote. "That's all I'm going on nothing more."

It does seem that Lampard will be forced to leave Chelsea at the end of the season, with the European champions offering no indications they want to keep him.

The England international, who can now speak to any club about a move as he only has six months left on his deal, has been strongly linked with the Los Angeles Galaxy as well as a host of European sides.

Lampard's partner said in a television interview on Thursday that there is lingering uncertainty about his footballing future.

"We don't know what's happening there, we're not sure what's going on," Christine Bleakley said.