In extending his commitment to the club, Wisdom joins Raheem Sterling, Suso, Luis Suarez, Martin Skrtel, Daniel Agger, Brad Jones and Jonjo Shelvey, who have all agreed new deals since the end of last season. 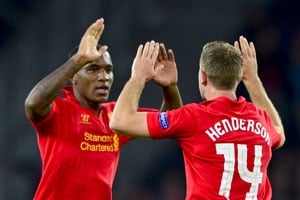 Liverpool defender Andre Wisdom has cemented his emergence as a member of the first-team squad by signing a new long-term contract, the Premier League club announced on Wednesday.

The 19-year-old made his debut in the Europa League earlier this season and an injury to left-back Jose Enrique has enabled him to make 14 appearances so far in the current campaign.

Liverpool did not reveal the length of the contract.

"It was an easy decision to make -- as soon as they offered it to me, I grabbed the opportunity with both hands because it's a great club and I just want to continue to play for Liverpool," Wisdom said.

"I am happy with the progress I've made so far and hopefully I can progress more in the second half of the season and continue to keep playing."

In extending his commitment to the club, Wisdom joins Raheem Sterling, Suso, Luis Suarez, Martin Skrtel, Daniel Agger, Brad Jones and Jonjo Shelvey, who have all agreed new deals since the end of last season.

"It's another great example of a player committing to the club and what we're trying to achieve under (manager) Brendan (Rodgers)," managing director Ian Ayre told the Liverpool website.

"He's a great young player, shown a fantastic improvement, broken into the first team and made a huge contribution and, rightly so, we've provided him with a new contract and a long-term one."

Comments
Topics mentioned in this article
Football Liverpool Manchester City S Mususo Mark Hughes Andre Wisdom Raheem Sterling Alex Ferguson English Premier League
Get the latest updates on ICC T20 Worldcup 2022 and CWG 2022 check out the Schedule, Live Score and Medals Tally. Like us on Facebook or follow us on Twitter for more sports updates. You can also download the NDTV Cricket app for Android or iOS.