The result will also complicate Benitez's preparations for next week's Europa League final against Benfica, but it did allow Spurs manager Andre Villas-Boas to depart with a smile after his first game back at Stamford Bridge since he was sacked by Chelsea last year. 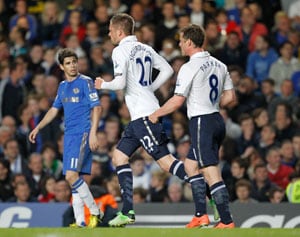 Substitute Gylfi Sigurdsson scored an 80th-minute equaliser to snatch a 2-2 draw for Tottenham Hotspur at Chelsea on Wednesday that prevented their opponents from effectively securing a place in the Champions League.

A goal from Ramires looked to have taken Chelsea to the brink of a top-four finish, after Oscar's opener for the hosts had been cancelled out by a fine solo goal from Emmanuel Adebayor on a night of high tension at Stamford Bridge.

However, Adebayor created a late opening for Sigurdsson with a delightful back-heel, and the Iceland midfielder swept home to keep Spurs' hopes of Champions League football alive and kicking.

With two games to play in the Premier League and only the top four teams qualifying for the Champions League, Chelsea, in third, lead fourth-place Arsenal by two points, with Spurs just a point further back in fifth.

Alex Ferguson's impending retirement as Manchester United manager means interim Chelsea coach Rafael Benitez looks set to go down as the last manager to ever get the better of him, but that was of little consolation after his side spurned a gilt-edged opportunity to book a place in the Champions League.

"We had the chance today. Twice we had the advantage, and we could have killed the game," rued the Spaniard.

"We always try to win, and it's clear we want to finish in the top three or four. We have to win one more match and we can guarantee that top four."

The result will also complicate Benitez's preparations for next week's Europa League final against Benfica, but it did allow Spurs manager Andre Villas-Boas to depart with a smile after his first game back at Stamford Bridge since he was sacked by Chelsea last year.

"Now somebody else will have to drop points, but our focus is on us doing our job in the remaining fixtures and in the Premier League anything can happen. Keep the faith," said Villas-Boas.

"The Premier League is completely unpredictable. The next fixtures, before the emotions of the last games of the season, can be decisive."

Eden Hazard's recovery from the calf strain that kept him out of Sunday's 1-0 win at Manchester United allowed Chelsea to line up with all three of their nimble attacking technicians in Hazard, Oscar and Juan Mata.

Mata was the first player to announce himself, swivelling to lift a half-volley over the bar in the seventh minute, and shortly afterwards, he created Chelsea's opener.

The Spaniard's right-wing corner was headed on by Gary Cahill and Oscar pounced to nod the ball in from close range.

With man of the season Gareth Bale starved of possession, Spurs did not look likely to reply, but in the 26th minute, Adebayor produced a moment to remember to haul his side level.

Collecting the ball midway inside his own half, the lolloping Togolese striker exploited generosity in the home defence by ambling downfield and then shaped a sumptuous shot into the top-right corner from 25 yards.

Briefly, Spurs were on top, Cahill sliding in to block from Bale and Adebayor volleying a difficult chance over the bar, but six minutes before the interval, Chelsea restored their lead.

Fernando Torres' pass from wide on the right may have been intended for Oscar, but Ramires burst in front of his Brazilian countryman to toe a shot past Hugo Lloris.

Chelsea began the second half like a side determined to put the game to bed, with Torres scuffing a shot at Lloris from a David Luiz cross and Cesar Azpilicueta almost embarrassing the Spurs goalkeeper with a dipping cross from the right.

As gentle rainfall began to slicken the playing surface, Hazard shot over from barely six yards after cutting inside Kyle Walker, before Ramires fell victim to the weather, slipping at the vital juncture after Mata played him in.

The Champions League nonetheless beckoned, only for Sigurdsson to seize on Adebayor's audacious flick before wrapping a low shot around Petr Cech to maintain the suspense in the race for the top four.