Sunderland have signed defender Wayne Bridge on loan for the rest of the season from Premier League leaders Manchester City, the north-east club said Tuesday. 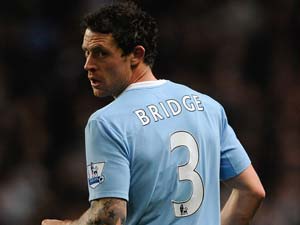 Sunderland have signed defender Wayne Bridge on loan for the rest of the season from Premier League leaders Manchester City, the north-east club said Tuesday.

The 31-year-old former England international, who is available for Sunderland's league game against Norwich on Wednesday, has played just once for City this season, in a League Cup match in September.

Bridge joined City from Chelsea in a £12million move in January 2009, but has managed only 58 appearances in his three years with the club.

The left-back, who has 30 senior England caps, would fill a position which has been vacant for some time at the Stadium of Light.

He began his career with home-town club Southampton and hit the big time when he was snapped up by Chelsea in a £7million deal in July 2003.

"I'm hoping that with Wayne's undoubted experience and ability he can be a big help to the team until the end of the season," Sunderland manager Martin O'Neill told the club's official website.

Comments
Topics mentioned in this article
Football Wayne Bridge Nedum Onuoha Manchester United Mark Hughes Alex Ferguson Manchester City Inter Milan Sunderland English Premier League
Get the latest updates on IPL 2020, check out the IPL Schedule for 2020 and Indian Premier League (IPL) Cricket live score . Like us on Facebook or follow us on Twitter for more sports updates. You can also download the NDTV Cricket app for Android or iOS.