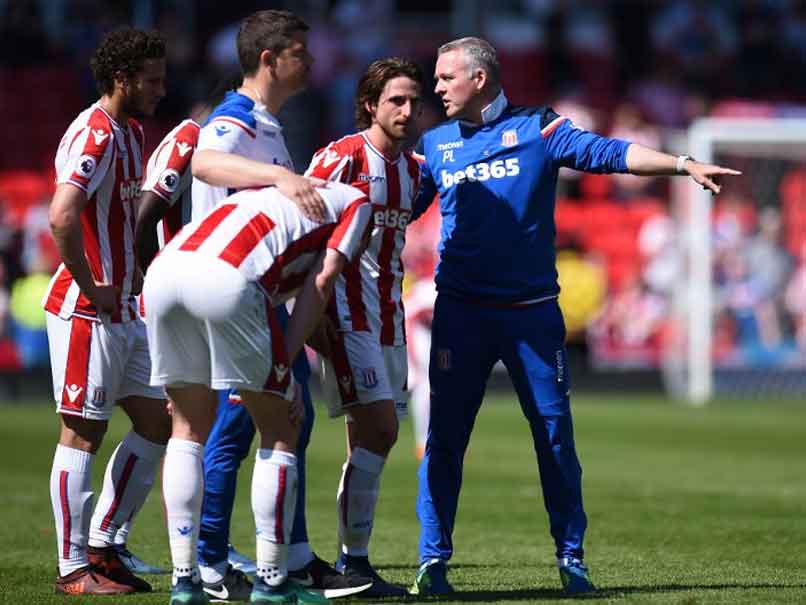 After a decade in the top flight Stoke City were relegated from the Premier League on Saturday when they blew a one goal lead to lose 2-1 at home to Crystal Palace. Paul Lambert's side are second bottom, three points from the safety zone, but with only one game remaining they are doomed. With fourth-bottom Swansea and third-bottom Southampton playing each other in midweek, it is impossible for Stoke to collect enough points to avoid slipping into the Championship. Stoke spent 10 seasons in the Premier League, but a run of 13 games without a victory ensured that streak is over.

Stoke goalkeeper Jack Butland was in tears at the final whistle and City fans were just as emotional as the realisation of their team's relegation sank in.

Hundreds left the bet365 stadium in the closing minutes before those that remained sang "City til I die" in a defiant rallying cry.

Stoke captain Ryan Shawcross conceded the players had only themselves to blame.

"It's difficult obviously but it's not just about one game. It's over a season and we've not been good enough all season," he said.

"Ultimately it's down to the players. Since the gaffer has come in we've had a right go and been in every game."

The blame for Stoke's predicament lies jointly with Lambert and Mark Hughes, who was sacked in January after a wretched run culminated with an embarrassing FA Cup third round defeat against fourth tier Coventry.

"My emotions are up and down. It is a tough afternoon. I am feeling for everyone connected with the club," Lambert said.

"When teams don't get results you can be sleep-walking into positions you don't want to be in. We never had enough.

"Since I came in the lads have given everything but we came short. It is a chance to rebuild."

The Potters won their first match with Lambert in charge against Huddersfield, but that was a false dawn as they remained deep in trouble for the rest of the season.

Hughes could suffer the indignity of having a role in two relegations in one season as his Southampton side, who face Everton later on Saturday, are in severe trouble themselves.

Xherdan Shaqiri had described the Palace clash as "a war we have to win" and the Stoke star landed the first blow in the 43rd minute.

Having been fouled on the edge of the penalty area, Shaqiri picked himself up and exacted his revenge.

Shaqiri's superb left-footed free-kick took a slight deflection off Palace midfielder Ruben Loftus-Cheek as it curled past Wayne Hennessey before he could react.

It was the Swiss forward's first goal since February and he celebrated by sprinting to the touchline to jump into Lambert's arms.

But Stoke's nerves were still frayed.

They couldn't cling onto their lead and Palace midfielder James McArthur equalised with a clinical finish in the 68th minute.

Forced to throw men forward in search of a winner, Lambert's side were carved open in the 86th minute as Patrick van Aanholt slotted home to seal Stoke's fate.

Comments
Topics mentioned in this article
Stoke City Crystal Palace Football English Premier League
Get the latest updates on ICC T20 Worldcup 2022, check out the Schedule and Live Score. Like us on Facebook or follow us on Twitter for more sports updates. You can also download the NDTV Cricket app for Android or iOS.