Chelsea were victims of Newcastle's French revolution as Moussa Sissoko inspired a dramatic 3-2 victory over the spluttering Blues at St James' Park on Saturday. 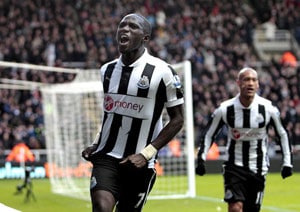 Chelsea were victims of Newcastle's French revolution as Moussa Sissoko inspired a dramatic 3-2 victory over the spluttering Blues at St James' Park on Saturday.

Sissoko, signed from Toulouse during the transfer window, scored twice to seal a come from behind win for Newcastle, who look to have bought wisely by concentrating on recruting players from Ligue 1 in the past month.

After taking the lead through Jonas Gutierrez, Newcastle could have folded when Frank Lampard sparked a Chelsea fightback with a goal that meant he became the first Premier League player to reach double figures in ten successive seasons.

In the process, he delivered another blow to third placed Chelsea, who squandered a two-goal lead in a 2-2 draw at Reading in midweek and still remain uncertain of a top four finish.

It was a game with a myriad of sub-plots, notably the return of Demba Ba, who remains Newcastle's leading scorer this season despite his move to Chelsea at the start of the transfer window.

But his involvement lasted only 42 minutes before he was replaced by Fernando Torres after suffering a facial injury when he headed wide from an excellent chance 10 minutes earlier.

However, the most interesting aspect of the game centred on the home debut of the contingent of French players signed by Newcastle in the past fortnight.

Sissoko and Yoan Gouffran were both in the side, with the former Toulouse man given a forward role alongside Papiss Cisse, who was back in his favourite place as the spearhead of the attack in the wake of Ba's exit.

Sissoko, in particular, made a favourable impression during an enterprising start by Newcastle, who should still have gone behind on 15 minutes when Lampard carelessly lashed Ashley Cole's cross over the bar from only eight yards.

When Cisse proved more accurate in the the 36th minute, Chelsea keeper Petr Cech showed tremendous reactions to go down to his left to save.

But even Cech was left stranded by the accuracy of Gutierrez's header when he guided in Davide Santon's cross to score for the first time in nearly a year.

Chelsea's response to the setback was unimpressive at first. They had not lost in their previous five trips to St James' Park, conceding only one goal in that time, but they continued to look ragged in the second-half until Lampard's superb goal.

There seemed to be little danger in the 55th minute when he collected the ball 30 yards from goal, but Lampard lashed in a shot that swerved and dipped on its way past Tim Krul.

Chelsea suddenly came alive and Lampard should have added a second goal on the hour when his header was directed straight at the Dutch 'keeper.

But another Chelsea goal was only delayed for another minute and it was a magnificent one, steered into the top corner by Mata when the ball fell to him on the angle of the area.

Newcastle were unlucky to be behind and responded well by equalising in the 70 minute with a goal made in France.

Gouffran broke clear and, when his shot was pushed out by Cech, Sissoko followed up to score his first goal for the club.

He nearly got a second two minutes later when his pace and power embarrassed Cole, who was rescued by Cech's splendid save from an angled shot.

And Sissoko had the last word when he drilled in a low shot from the edge of the area on 90 minutes to become an instant hero with the Newcastle supporters.

Comments
Topics mentioned in this article
Football Manchester City Newcastle United Chelsea Mark Hughes Moussa Sissoko Alex Ferguson English Premier League
Get the latest updates on India vs Australia and check out  Schedule, Results and Live Score. Like us on Facebook or follow us on Twitter for more sports updates. You can also download the NDTV Cricket app for Android or iOS.