Manchester United manager Alex Ferguson will only 'tweak' his squad in the close season in a bid to retain their Premier League title next term, he said on Friday. 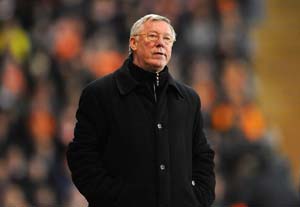 Manchester United manager Alex Ferguson will only 'tweak' his squad in the close season in a bid to retain their Premier League title next term, he said on Friday.

Incoming United chief executive Ed Woodward said on Thursday there was no need for "a major retooling" of the Premier League champions.

But Ferguson admitted he will need to make additions to ensure United remain in front of rivals Manchester City, Chelsea, Tottenham and Arsenal who are all likely to bring in fresh faces in a bid to catch the Red Devils.

"Tweaking is the right word, we will look at one or two bodies," Ferguson explained. "We have to take the fact that other teams are going to strengthen into consideration. You also have to consider ages of some players but in the main we know where we are in regards to players."

Ferguson warned bringing in too many players could cause him problems, with an already large squad at his disposal.

"We have great strength in depth," he said. "We don't want to confuse ourselves and have too many players. Any time I have asked the Glazers (Manchester United's US-based owners to sanction a transfer) they have delivered."

United face Chelsea on Sunday and Ferguson said there would be no slacking despite the Old Trafford club having already secured the Premier League title.

United went to Arsenal last weekend and could only manager a draw which ended their hopes of overhauling Chelsea's Premier League record tally of 95 points in a season.

But veteran Scottish manager Ferguson said United had an obligation to the other teams battling Chelsea for a top-four spot and Champions League qualification.

"Chelsea are chasing a Champions League position too so we should be playing as strong a team as we can," Ferguson said.

"Chelsea have done fantastically over the last few weeks and they have reached the Europa League final so it should be a good game. We have not done well against the over the last few years. Hopefully we can put that right on Sunday, it is time for us to play with enthusiasm and enjoyment and try to finish off the season."

Before this season started, Chelsea -- who completed a 5-2 aggregate Europa League semi-final win over Basel at Stamford Bridge on Thursday -- were tipped to challenge United for the title but the Blues find themselves 20 points behind the champions.

"You can be surprised by these things but you can also say our consistency has created that gap," Ferguson said. "When Roberto di Matteo (the former Chelsea manager) left it took them a long time to get going again. They only got consistency in the last few weeks."

"I think going back is a big attraction for him, but I don't know what his plan is," Ferguson said of Mourinho.

Chelsea's current boss Rafael Benitez has finished the season strongly, despite fans' initial anger at his appointment, and Ferguson thinks the Spaniard, with whom he has enjoyed a sparky relationship dating from Benitez's time in charge of Liverpool, will be hungry to add to his personal trophy tally.

Ferguson added: "I think he is very concerned about his CV but you cannot hide the fact he has done a good job. Fans settled down a bit and they have let him get on with his job."

Comments
Topics mentioned in this article
Football Arsenal Manchester United Manchester City Chelsea Alex Ferguson Mark Hughes Wayne Rooney English Premier League
Get the latest updates on ICC T20 Worldcup 2022 and CWG 2022 check out the Schedule, Live Score and Medals Tally. Like us on Facebook or follow us on Twitter for more sports updates. You can also download the NDTV Cricket app for Android or iOS.