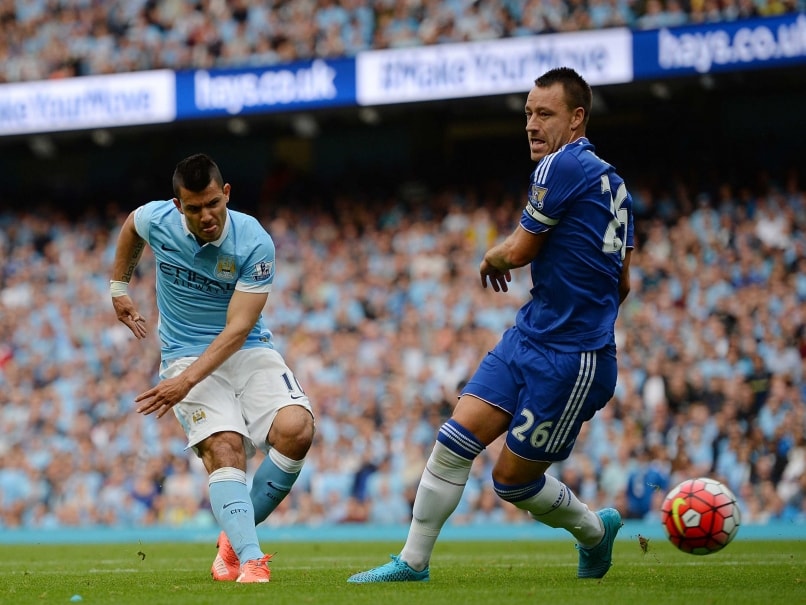 Sergio Aguero, Vincent Kompany and Fernandinho scored as Manchester City F.C. crushed Chelsea F.C. 3-0 on Sunday to establish a five-point advantage over the champions in the fledgling Premier League table.

After going close several times, Aguero celebrated his return to the starting XI by wriggling through Chelsea's defence to score a 31st-minute opener before Kompany and Fernandinho made the game safe late on.

The well-earned victory continued City's impressive start to the season following their 3-0 win at West Bromwich Albion and gave Manuel Pellegrini a first win over his nemesis Jose Mourinho since the Portuguese returned to Chelsea in 2013.

Defeat completed a miserable week for Mourinho, widely criticised for demoting his medics Eva Carneiro and Jon Fearn after last weekend's 2-2 draw with Swansea City, and means Chelsea have failed to win one of their first two league games for the first time since 1998.

It was also a day to forget for visiting captain John Terry, who watched the second half from the bench after being substituted at half-time -- the first time Mourinho had taken him off in 177 league games.

After a flurry of near-misses, Aguero broke the deadlock by exchanging passes with Yaya Toure, darting into the box and placing a low shot beyond the reach of Asmir Begovic, deputising for the suspended Thibaut Courtois.

Hazard forced Joe Hart into a save in the second half, but City looked more likely to add to their lead and so it proved as Kompany headed home from David Silva's 79th-minute corner before Fernandinho drilled home from the edge of the box.

Earlier, Arsene Wenger breathed a sigh of relief as Arsenal got their title challenge up and running with a hard-fought 2-1 win at Crystal Palace.

After slumping to a dismal 2-0 defeat against West Ham United in their opening game, Wenger's side had no margin for error at Selhurst Park if they wanted to avoid being cast adrift in the title race.

They rose to the challenge, securing a first league win of the season thanks to Olivier Giroud's superb 16th-minute volley and a Damien Delaney own goal in the 55th minute after Joel Ward had blasted Palace level.

It was a much-needed confidence boost for the Gunners and Wenger conceded it would have been hard to recover if they had left Selhurst Park empty-handed.

"I'm very pleased with the three points. If we had gone two games and zero points it would be absolutely difficult and we knew this would be a tricky one," Wenger said.

"Last week we had a bit of a stroll and thought we would win the game. Today we played real Premier League football from the first minute to the last.

"With the ambitions we have made, you have to have full commitment and we had that today."

Palace manager Alan Pardew was furious with referee Lee Mason's refusal to send off Arsenal midfielder Francis Coquelin, who avoided a red card despite several aggressive challenges when he had already been booked.

"I said to Lee Mason: 'Listen, that tackle before half-time is not a sending-off at that point, but that's his last chance, you know that,'" Pardew said.

"He then makes the foul and he's (should be) off at that point. Arsene Wenger knew that and took him off. It's a decision Lee Mason needs to be braver on."

But Wenger claimed Mason had got it right.

"I felt it wasn't fortunate (that Coquelin avoided a red card)," said the Frenchman.

"I would like to see that again, but in the end the pressure created by the crowd meant I took him off."

Comments
Topics mentioned in this article
Sergio Aguero Fernandinho Vincent Kompany Manchester City Chelsea English Premier League Football
Get the latest updates on IPL Auction 2023 and check out  IPL 2023 and Live Cricket Score. Like us on Facebook or follow us on Twitter for more sports updates. You can also download the NDTV Cricket app for Android or iOS.