Sergio Aguero and Carlos Tevez each scored twice to add to David Silva's opener as Manchester City recorded a commanding 5-0 victory over Aston Villa on Saturday. 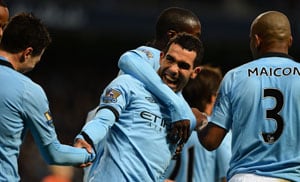 Sergio Aguero and Carlos Tevez each scored twice to add to David Silva's opener as Manchester City recorded a commanding 5-0 victory over Aston Villa on Saturday.

Silva opened the scoring with his first goal of the season and after Andreas Weimann was controversially penalised for handball, Aguero converted from the spot.

Tevez added another penalty and after Aguero thumped in a fourth, Tevez had a tap-in for a fifth as City extended their unbeaten home league run to 36 matches and moved top of the table ahead of Manchester United's game at Norwich City.

Only Chelsea have managed a longer unbeaten run in the Premier League era, but that record stands at 86 games.

More importantly for coach Roberto Mancini, however, was the fact that his team, who had not managed more than three goals in a match this term, recovered the incisiveness that took them to the Premier League title last season.

The game opened with the familiar pattern of City being camped in Villa territory and probing for a breakthrough, which seemed close when Aguero met Samir Nasri's corner and Tevez diverted a shot narrowly over the bar.

Brazilian defender Maicon's start to life at the Etihad Stadium has been interrupted by injury but he made a good early impression against Villa, getting in position to miss with a wild effort and then thumping a drive across the area from Nasri's pass.

In a rare Villa break, Christian Benteke had an effort blocked by Matijia Nastasic on the edge of the area.

Joe Hart, who has faced significant criticism in the wake of a shaky display in England's 4-2 defeat by Sweden, showed there is nothing wrong with his reflexes when Vincent Kompany prodded a Matthew Lowton cross towards his own goal and the goalkeeper reacted quickly to push it away.

Silva had a shot deflected over the bar by Barry Bannan but Villa continued to enjoy the better chances, despite being on the back foot.

Enda Stevens whipped in a cross from the left and Belgian Benteke climbed above Nastasic to produce a powerful header that was blocked by Hart at full stretch.

Gael Clichy also had a drive saved by Villa's American goalkeeper Brad Guzan before Nastasic missed with a header from six yards from the Nasri corner that followed.

As the pressure continued, Maicon whipped in a cross from the right and Nasri's strike was held by Guzan.

Yaya Toure also headed wide from another Nasri corner and just before the interval, Tevez saw a low effort turned around the post by Guzan.

From the corner that followed, Villa failed to clear from Kompany and Tevez and Silva burst onto the loose ball ahead of Nastasic to bundle home at the far post.

The Spaniard then had another effort pushed wide by Guzan after racing into the area to collect a Tevez pass.

After the interval, City continued to search for a second and Tevez saw a drive fly just past the post from the edge of the area before Ron Vlaar denied Aguero with a fine sliding challenge.

At the corner that followed, assistant referee Adrian Holes held his flag out and, to the bemusement of the crowd, referee Jon Moss pointed to the spot, presumably because the linesman felt Weimann had handled.

Aguero dispatched the penalty and Tevez followed suit a couple of minutes later after Bannan handled as Silva attempted to cut inside him.

Aguero bust clear and fired in a shot at the near post to add a fourth before a Nasri cross was allowed all the way to the far post for Tevez to prod in a fifth of the afternoon.