Defender Ryan Bertrand has signed a new five-year contract with Chelsea, the London side said on its website on Wednesday. 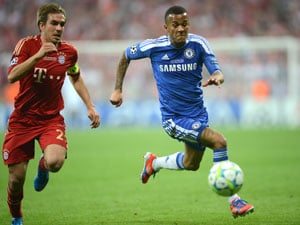 Defender Ryan Bertrand has signed a new five-year contract with Chelsea, the London side said on its website on Wednesday.

The left back joined the Chelsea academy in 2005 and gained competitive experience over several seasons on loan in the Championship and lower divisions before breaking into the first team in 2011.

The 23-year-old has scored one goal in 19 appearances for the Blues, including the Champions League final where he stood in for the suspended Ashley Cole.

Bertrand has represented England at all youth levels and made his full international debut in last month in a friendly against Italy with England winning 2-1.

Comments
Topics mentioned in this article
Football Chelsea Manchester City Alex Ferguson Mark Hughes Ryan Bertrand English Premier League
Get the latest updates on ICC T20 Worldcup 2022 and CWG 2022 check out the Schedule, Live Score and Medals Tally. Like us on Facebook or follow us on Twitter for more sports updates. You can also download the NDTV Cricket app for Android or iOS.