Ferguson has rotated his players throughout the Christmas period, with David de Gea, Patrice Evra, Jonny Evans and Michael Carrick the only players to start each of their four league matches. 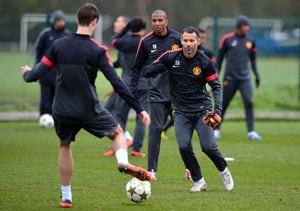 Ryan Giggs insists Alex Ferguson is having no problems keeping his large Manchester United squad happy ahead of the FA Cup third round clash at West Ham on Saturday.

Ferguson has rotated his players throughout the Christmas period, with David de Gea, Patrice Evra, Jonny Evans and Michael Carrick the only players to start each of their four league matches.

That run has seen United secure 10 points to preserve their seven-point advantage at the top of the Premier League.

Following the 4-0 win at Wigan on Tuesday Ferguson suggested there will be further changes for the Cup tie at Upton Park, hinting that Japan midfielder Shinji Kagawa could be set for a second start since returning from two months out with a knee problem.

Giggs, 39, has been reduced to a supporting role this season, as has Paul Scholes, 38, and between them the two veterans have started just 13 league games.

But the Welsh midfielder maintains United's players are used to Ferguson making the most of the options in his squad.

"But it's just a case of looking after your fitness and making sure you're sharp and you're not peaking in the middle of the week when you need to be prepared for a Saturday match.

"A lot of players are in that position though because we have a big squad and you're not going to play every game.

"The likes of me and Scholesy probably play fewer matches than a lot of the players but we know we have to be ready when we're called upon.

"My role in the team has changed over the last five or six years. I'm an experienced player and a kind of elder statesman and it's a position I'm quite comfortable with regard to helping the young players.

"I'm not starting as many games but it's about being ready when I do."

In recent years Ferguson has regularly expressed his frustration at United's failure to win the FA Cup since 2004.

The United manager also has recent memories of suffering a shock at Upton Park, having suffered an embarrassing 4-0 defeat in the League Cup quarter-finals two years ago.

The mood at Upton Park was always likely to be upbeat following West Ham's impressive 2-1 victory over Norwich on Tuesday that meant Sam Allardyce's side started 2013 in a comfortable mid-table position in the Premier League.

But the atmosphere amongst home supporters will be further lifted following the return of former favourite Joe Cole from Liverpool.

Cole, now 31, came through the ranks at West Ham before leaving for Chelsea in 2003 although the formalities of the move are not expected to have been completed in time for the player to face United.

Kevin Nolan and James Collins will return to the West Ham line-up following suspension and midfielder Mark Noble is confident the hosts are capable of springing an upset.

"It will be a great atmosphere for the fans and a great cup tie as they always are here," said Noble.

"When you pluck Manchester United out of the hat you are over the moon, so whatever team the manager picks, I am sure it will be a strong one to have a right go at them and we will see what happens.

"If we can play anything like we did against Norwich and against United at their place earlier in the season, then we will have a chance."

Comments
Topics mentioned in this article
Football Manchester City Manchester United Arsenal Chelsea Mark Hughes Ryan Giggs Wayne Rooney Alex Ferguson English Premier League
Get the latest updates on ICC T20 Worldcup 2022 and CWG 2022 check out the Schedule, Live Score and Medals Tally. Like us on Facebook or follow us on Twitter for more sports updates. You can also download the NDTV Cricket app for Android or iOS.