The Reds suffered a 3-1 defeat to Stoke at the Britannia Stadium as Jonathan Walters scored twice either side of Kenwyne Jones' effort to overturn Steven Gerrard's early penalty -- awarded for a foul on Luis Suarez - for the visitors. 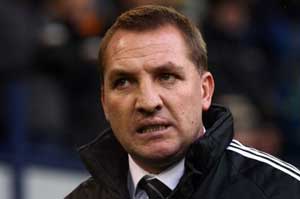 Liverpool manager Brendan Rodgers wants his side to show some consistency if they are going to challenge for the top four in the Premier League.

The Reds suffered a 3-1 defeat to Stoke at the Britannia Stadium as Jonathan Walters scored twice either side of Kenwyne Jones' effort to overturn Steven Gerrard's early penalty -- awarded for a foul on Luis Suarez - for the visitors.

Stoke's unbeaten run is now extended to nine games - their best ever in the Premier League while Liverpool suffered more inconsistency by failing to build on Saturday's 4-0 win over Fulham.

"We conceded soft goals after a great start, a bit of magic by Luis earned us our first penalty of the season," said Rodgers.

"We were 1-0 up at a place where it's difficult place to score goals. We needed to gain the initiative. But as it was it was always going to be an uphill task.

"Our inconsistency is the biggest thing, we were terrific against Fulham. But you have to put a run together, otherwise you're taking two steps forward and one back.

"You have to earn the right to play, especially at Stoke, you know you'll get pressed. We have to find it otherwise we'll never progress, but this was just too easy."

Suarez was booed when the announcer at the Britannia Stadium read out his name before the game as the home faithful did not forget the dive that the Uruguayan pulled off at Anfield in the October meeting of these two.

While Suarez did not get anything for that then, Stoke manager Tony Pulis was livid he was not punished but it was hard to argue against Howard Webb's decision to hand Liverpool a penalty in the second minute of this clash.

Ryan Shawcross tugged Suarez's shirt in the area and the Reds striker went down before Gerrard calmly slotted home the penalty.

"For the penalty, Shawcross got caught a bit square and flat, he was caught out, Suarez did brilliantly," explained Pulis.

However, just three minutes later Shawcross helped Stoke to get level as Jones nodded on to Walters and the Republic of Ireland international raced through before firing home.

Raheem Sterling came on for Suso at the break and the winger almost made an instant impact with a cross for Suarez but the Uruguayan fluffed his effort well wide.

Andy Wilkinson's long throw in the 49th minute made it 3-1 as he found Jones who nodded on again for Walters.

This time he rose to chest the ball and turn before volleying past Pepe Reina who could not keep the ball out despite getting his fingertips to it.

"Walters epitomises everything we do at this club, his attitude and commitment is fabulous," said Pulis.

The Stoke fans sang "3-1 to the rugby team" as Liverpool pressed forward with Gerrard's late chance that forced Asmir Begovic into a decent stop their only late chance of note.

Comments
Topics mentioned in this article
Football Jonathan Walters Liverpool Manchester City Alex Ferguson Mark Hughes English Premier League
Get the latest updates on Fifa Worldcup 2022 and check out  Fifa World Cup Schedule, Stats and Live Cricket Score. Like us on Facebook or follow us on Twitter for more sports updates. You can also download the NDTV Cricket app for Android or iOS.