Liverpool boss Brendan Rodgers tipped Reading keeper Alex McCarthy for an England call-up after he starred in the 0-0 draw at Madejski Stadium. 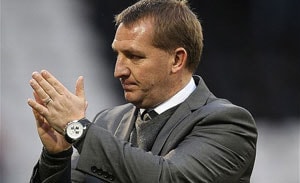 Liverpool boss Brendan Rodgers tipped Reading keeper Alex McCarthy for an England call-up after he starred in the 0-0 draw at Madejski Stadium.

McCarthy was inspired for the rock-bottom Royals from start to finish as he denied the Reds quartet of Luis Suarez, Steven Gerarrd, Phillipe Coutinho and Daniel Sturridge.

And Rodgers, the former Reading boss who coached McCarthy during his six-month reign in 2009, admitted that the 23-year-old is destined for the top after his stunning display in his first game back since shoulder surgery in November.

"There is no question (he can play for England)," said Rodgers.

"I think he will have a hard job. Joe Hart is one of the top five in the world, but there is no doubt Alex is a top talent and will be looking to get games and became number one.

"I don't think our players could have done any more. I know young Alex very well and he will be a top keeper. To perform like that after being out so long is fabulous.

"We're frustrated, because some of our play was very good. We can't forget Pepe Reina made a great save as well. If you look at us we're one of the top scorers in the league. Some of our performances have been very good. Next year we must turn them into points."

The draw left Liverpool in seventh place, eight points off the European places.

For the second game running Liverpool failed to hit the back of the net, but for Reading it was their fourth clean sheet of the season and at least saw their losing run of eight in all competitions come to an end.

"The atmosphere was really good an the positivity around the place,"

said manager Nigel Adkins after he guided his new side to their first point in his third game in charge.

"We're really pleased, they work hard and the saves Alex has pulled off were world class. There is a lot of positivity moving forward.

"Obviously when a new manager comes in they have new ides. Players are aware I will change things around, but you cant do that overnight. For me a lot of positives are bearing fruit."

Before the kick-off, both sets of fans observed a minute's silence to pay their respects to the 96 Liverpool fans who lost their lives in the Hillsborough disaster 24 years ago.

Liverpudlian Adkins noted: "I thought the minute's silence was fantastic and rightly so. Everyone should be pleased."

And although some fans then started chanting anti-Margaret Thatcher songs early in the first half, Adkins said he didn't hear the discontent.

He added: "I didn't hear that. You just hear a buzz and a roar and not the individual words."

Comments
Topics mentioned in this article
Football Manchester City Liverpool Mark Hughes Alex Ferguson Alex McCarthy English Premier League
Get the latest updates on SA vs IND 2021-22, check out the Schedule and Live Score . Like us on Facebook or follow us on Twitter for more sports updates. You can also download the NDTV Cricket app for Android or iOS.