Arsenal manager Arsene Wenger on Friday admitted that his decision to allow Robin van Persie to join Manchester United was a "massive gamble" that could damage his side's hopes of a successful season. 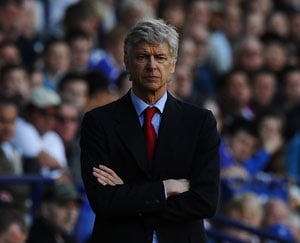 Arsenal manager Arsene Wenger on Friday admitted that his decision to allow Robin van Persie to join Manchester United was a "massive gamble" that could damage his side's hopes of a successful season.

Van Persie joined United in a £24 million ($37 million, 30.6 million euro) switch after Wenger decided it was not worth battling to keep the Dutch striker at the Emirates Stadium against his will.

Wenger said he could have made him see out the final year of his contract and was aware the loss of an inspirational figure who scored 37 goals in all competitions last season was a major blow, as the club seeks to end a seven-year trophy drought.

But the Frenchman felt it was a gamble worth taking because he wants to have a fully committed team going into the new Premier League campaign, which starts with a home game against Sunderland on Saturday.

"The reality is when the player doesn't want to stay you have two ways: you either force him to stay or you accept the reality and you let him go. I have chosen the second solution," Wenger told a news conference.

"I know it is a massive challenge and a massive gamble I took but we have the quality to deal with the problem we have and at the end of the day I can talk and talk and talk but we can only show it on the pitch now.

"Time heals all things and of course at the moment people are hurt, which I understand, but what is important for us is to focus on the season in front of us.

"Players have gone, life goes on and the football club is 125 years old and other big players have left this club and we have always gone from season to season in a strong way."

Not for the first time in his Arsenal reign, Wenger has seen a player he developed from a raw rookie into a world-class talent opt to turn his back on the club.

And to make matters worse, Cameroon midfielder Alex Song could be the next Arsenal star to leave the Emirates Stadium.

Song is a £15 million target for Barcelona.

Asked if it was possible the 24-year-old could leave and if other players would arrive to replace Song and van Persie, Arsenal manager Wenger said: "Both can happen.

"This decision (on Song) is not made. No (bid has been made). I cannot tell you more."

If the Cameroon star does leave, Wenger will have lost Song, van Persie, Cesc Fabregas, Samir Nasri and Gael Clichy from his squad in the last 12 months.

There can be no clearer sign of Arsenal's gradual fall from grace. Where once they were regarded as certain contenders for the Premier League title, the Gunners are now happy just to finish in the top four.

But Wenger, who signed strikers Lukas Podolski and Olivier Giroud earlier in the close-season, is adamant the north London club will remain a force to be reckoned with, despite the loss of van Persie and the possible departure of Song.

"We lose a great player, a world-class player, I don't deny that, it is a massive challenge to replace him, so we have to be even more of a team and work even more together to compensate that loss," he said.

"However, we have lost world-class players before and we always survived."

Vermaelen has already skippered Arsenal at various times over the last two seasons and the centre-back will now wear the armband on a permanent basis, with Spanish midfielder Mikel Arteta appointed as vice-captain.

Comments
Topics mentioned in this article
Football Liverpool Manchester City Mark Hughes Arsenal Chelsea Manchester United Wayne Rooney Alex Ferguson Thomas Vermaelen English Premier League
Get the latest updates on ICC T20 Worldcup 2022 and CWG 2022 check out the Schedule, Live Score and Medals Tally. Like us on Facebook or follow us on Twitter for more sports updates. You can also download the NDTV Cricket app for Android or iOS.