Manchester United prevailed at St Mary's on Monday despite an error-strewn display in which they mustered only three attempts at goal, with Van Persie netting either side of Graziano Pelle's first-half equaliser. 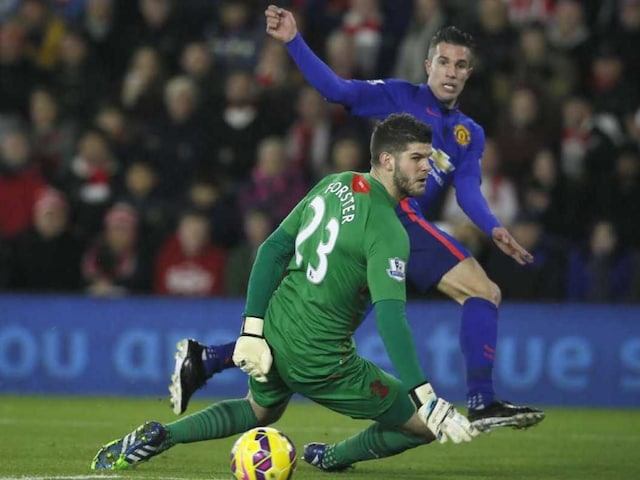 Manchester United manager Louis van Gaal conceded that he was indebted to Robin van Persie after the Dutch striker's brace earned his below-par side a 2-1 victory at Southampton.

United prevailed at St Mary's on Monday despite an error-strewn display in which they mustered only three attempts at goal, with Van Persie netting either side of Graziano Pelle's first-half equaliser.

It gave United a fifth consecutive win and sent them up to third place in the Premier League ahead of Sunday's home game with old enemies Liverpool, but Van Gaal admitted that his team had been "lucky".

"I think that not only the goals are telling something about Robin van Persie," the Dutchman told his post-match press conference.

"I think also his performance -- he was one of the three players on the pitch of Manchester United who were good or maybe very good."

Van Gaal refused to reveal the identities of the other two players who had met his expectations, and when asked for his verdict on the other 11 United players -- including substitutes -- he replied: "They were not good.

"There is a range of course between good and bad, but they were not good. Normally you have six, seven, eight players who are good and three players who are in that range. But today (Monday) there were too many players not good."

He added: "It's fantastic to be now third in the table, but I had hoped we would do that with a better performance. Because tonight we were the lucky team."

United lost defender Chris Smalling to a groin injury in the 18th minute, -- the latest in a sequence of defensive injuries -- while Van Gaal also withdrew teenage centre-back Paddy McNair before half-time.

It was a moment of public embarrassment for the 19-year-old defender, who ceded his place to midfielder Michael Carrick, but Van Gaal said that the youngster's shaky display had left him with no option.

"He had no confidence. He had given three chances away," Van Gaal explained.

"It's very disappointing for me and for Paddy, but I had to because as a manager I am responsible. It's tough, but it's also in his best interests."

Van Persie put United ahead in the 12th minute after seizing onto a blind back-pass from Jose Fonte, with Pelle slamming home an equaliser just after the half-hour.

Southampton seemed to have United on the ropes thereafter, but in the 71st minute Wayne Rooney lofted a free-kick into the box from wide on the left and Van Persie stole in to volley home his sixth goal of the season.

Analysing the game for Sky Sports, former United defender Gary Neville opined that his old club had "got away with murder", but Van Gaal appeared to disagree with his assessment.

"He can say everything because he is an ex-legend. But as an ex-legend or a legend, you have to know what you are saying," the United manager said.

Southampton manager Ronald Koeman has now seen his side lose three games in succession after previous defeats to Manchester City and Arsenal, but he felt the latest setback was largely self-inflicted.

"We did not lose against Man United tonight -- we lost by ourselves," he said.

"City were the better team, but we deserved more against Arsenal, and we deserved much more tonight. But if you give players like Van Persie those kinds of mistakes, they will punish you, for sure.

"We didn't punish them for their mistakes, and that was the difference in my opinion."

Comments
Topics mentioned in this article
Manchester United Robin Van Persie English Premier League Football
Get the latest Cricket news, check out the India cricket schedule, Cricket live score . Like us on Facebook or follow us on Twitter for more sports updates. You can also download the NDTV Cricket app for Android or iOS.