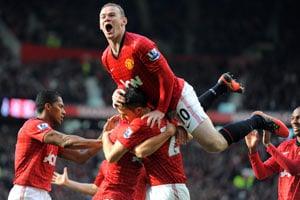 The Dutch striker needed fewer than three minutes to put United in front before Patrice Evra doubled their lead in the 67th minute.

Arsenal, for whom this defeat was their third in five matches, then saw this latest loss made worse when midfielder Jack Wilshere, in only his second game back following a long injury lay-off, was sent off for a second bookable offence after he caught Evra on the ankle.

But the European champions will return to top spot if they win at Swansea later on Saturday.

Van Persie, playing against Arsenal for the first time since his £24 million ($39 million) pre-season move from the Gunners, wasted little time in giving United the lead.

He struck in the third minute when, after Thomas Vermaelen failed to clear a Rafael cross from the right, he shot into the bottom corner of the net from the edge of the penalty area.

It was the 29-year-old van Persie's 10th goal in 13 United appearances.

United should have doubled their lead shortly before half-time when they were awarded a penalty after Santi Cazorla blocked Ashley Young's cross with his arm.

However, Evra did reward United's dominance when he headed in a Rooney cross following a short corner.

Cazorla pulled a goal back for Arsenal deep into stoppage time with virtually the last kick of the match, but defeat meant the Gunners were left nine points off the summit just 10 games into the season.

Premier League champions Manchester City, the only unbeaten side in English football's top-flight so far this term, are away to West Ham in Saturday's late kick-off match, having started the weekend level on points with United.