Gareth Bale was absent from the Tottenham squad for a pre-season friendly against Espanyol, but manager Andre Villas-Boas was able to hand debuts to both Soldado and Brazil midfielder Paulinho. 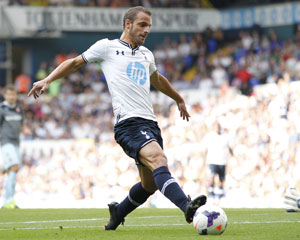 Spain striker Roberto Soldado claimed a debut goal as Tottenham Hotspur completed their pre-season preparations with a 1-1 draw against Spanish side Espanyol at White Hart Lane on Saturday.

Welsh winger Gareth Bale, strongly linked with Real Madrid, was absent from the Tottenham squad with a foot injury, but manager Andre Villas-Boas was able to hand debuts to both Soldado and Brazil midfielder Paulinho.

After narrowly missing out on Champions League qualification last season, Spurs have spent an estimated £50 million ($77.5 million, 58.1 million euros) to improve their squad during the close season, including a club-record £26 million to prise Soldado from Valencia.

Paulinho, a £17 million capture from world champions Corinthians, thought he had made a perfect start to his debut, but his sixth-minute header from Gylfi Sigurdsson's free-kick was ruled out for a marginal offside.

Soldado threatened with a flicked header, before opening his Spurs account from the penalty spot in the 29th minute after left-back Danny Rose had been sent flying by Javi Lopez.

The home side could not hold out until half-time, however, as the unmarked David Lopez headed in a near-post equaliser from Pizzi's right-wing corner in the 44th minute.

Both teams made multiple substitutions in the second period, before Diego Colotto came close to giving the visitors the lead when he headed over from a Juan Fuentes corner.

Spurs' best chance fell to midfielder Andros Townsend, so impressive on loan at Queens Park Rangers last season, but after cutting in from the right, his left-foot shot curled narrowly wide of the far post.