Chelsea coach Roberto Di Matteo paid a heavy price for tinkering with his team as the Blues went down 2-1 at his former club West Bromwich Albion on Saturday. 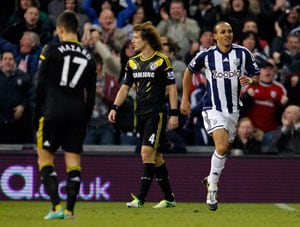 Chelsea coach Roberto Di Matteo paid a heavy price for tinkering with his team as the Blues went down 2-1 at his former club West Bromwich Albion on Saturday.

Shane Long and Peter Odemwingie bounced the Baggies into fourth place in the Premier League, as Chelsea's hopes of mounting a credible title challenge to the two Manchester clubs this season took another knock at the Hawthorns.

But Di Matteo had only himself to blame after leaving five players who may start in Tuesday's vital Champions League game at Juventus on the bench.

Albion needed some late heroics from goalkeeper Boaz Myhill, but there was no doubting their right to the three points.

Di Matteo, a former Albion manager, was left to reflect on the price of his big gamble after a result that left Chelsea third in the standings.

He broke up the heartbeat of his side this season -- the midfield trio of Juan Mata, Oscar and Eden Hazard -- by leaving the Spaniard and the Brazilian on the bench, along with Branislav Ivanovic, Ramires and Ashley Cole.

Hazard began in a central role behind Fernando Torres and was a shadow of his usual self.

But Chelsea's real problems were at the back, where they simply failed to get a grip on Long.

The Albion striker drifted away from the dozing David Luiz to nod in James Morrison's far post cross after 10 minutes.

Long had Chelsea in a panic again when he stretched for Billy Jones' cross.

He was denied by a lunge from Gary Cahill and vainly looked for a penalty after being bundled to the ground from behind.

The Ireland striker almost had his revenge when he shrugged off Cahill but fired wide.

Chelsea had nearly gone ahead after seven minutes when Cahill's shot was scrambled off the line by Liam Ridgewell.

But they did not trouble Albion again until Daniel Sturridge's effort was saved by Myhill half an hour later.

It paid off when the Belgian ghosted in at the far post to head home Cesar Azpilicueta's cross from the right.

Sturridge almost put Chelsea ahead just after the restart but it was Albion who struck next when Long crossed for Odemwingie to head in.

Once again, Chelsea's defending left plenty to be desired as Ryan Bertrand failed to cut out the cross.

Di Matteo's hand was forced and he pulled off the ineffective Torres and finally introduced Mata and Oscar for the last half an hour.

Chelsea poured forward and Mata put Sturridge through for a second time, but Myhill saved brilliantly.

Next, it was Oscar who set up Sturridge and he looked certain to score with time and space to pick his spot from eight yards.

But he dragged his shot wide and Chelsea suffered their second defeat in a run of four games that have brought them only two points.

Like his predecessor Andre Villas-Boas, Di Matteo is finding November a tough month.