Several English Premier League referees are debating over whether to boycott matches involving Chelsea in the wake of the club alleging fellow referee Mark Clattenburg made racist remarks in last Sunday's game with Manchester United according to former referee Clive Wilkes. 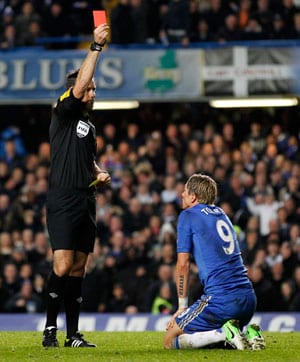 Several English Premier League referees are debating over whether to boycott matches involving Chelsea in the wake of the club alleging fellow referee Mark Clattenburg made racist remarks in last Sunday's game with Manchester United according to former referee Clive Wilkes.

Clattenburg, 37, is the subject of investigations by both the police and the Football Association over claims by Chelsea he used 'inappropriate language' including a racial slur aimed at their Nigerian midfielder Jon Obi Mikel.

Clattenburg maintains his innocence on all matters.

Wilkes told the Sun newspaper he had been in touch with some of his former colleagues and they had told him they were considering boycotting Chelsea games - especially as in their eyes it is not the first time the club have levelled accusations at one of their number.

"I keep in touch with a lot of the lads and there is such a strength of feeling about what is happening to Mark," he said.

"I know a few referees who are even talking about boycotting Chelsea games because of all this.

"Remember, it's not the first time Chelsea have targeted a referee - there's been Anders Frisk and Graham Poll.

"And some refs are now saying enough is enough. It's no exaggeration to say the refs in this country have never felt lower."

Wilkes added that the referees felt they were not receiving the support they deserved from above.

"They are so disillusioned. They feel vulnerable, feel that they are being left isolated - that they are getting no backing, no support," he said.

"They want to speak out themselves but are too frightened, they fear they will be sacked if they go public with their grievances.

"There have even been murmurings about strike action but that's very much the last resort.

"They'd much prefer to get around the table with the FA, PFA, the clubs and players to sort this out as quickly as possible."

Clattenburg, who has been stood down for this weekend's games, has received notable support this week from Arsenal manager Arsene Wenger and Manchester United's Alex Ferguson.

"I don't believe Mark Clattenburg would make any comments like that," Ferguson said Friday. "I refuse to believe it. I think it's unthinkable.

"In the modern climate, I just don't believe it. Simple as that. There is no way a referee would stoop to that, I'm convinced about that."

Comments
Topics mentioned in this article
Football Manchester United Manchester City Alex Ferguson Mark Hughes Chelsea English Premier League
Get the latest Cricket news, check out the India cricket schedule, Cricket live score . Like us on Facebook or follow us on Twitter for more sports updates. You can also download the NDTV Cricket app for Android or iOS.