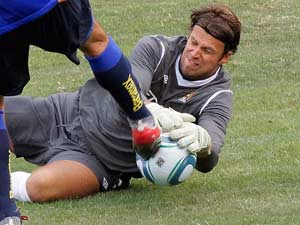 Taylor had been training with the Royals following his release from champions City at the end of last season and has finally agreed a one-year contract to act as back-up to first choice keeper Adam Federici.

Taylor's presence should also keep Federici on his toes after the Australian's howler allowed Michael Kightly to score for Stoke in Saturday's 1-1 draw at the Madejski Stadium.

"He is a very experienced goalkeeper at the top level and having him here allows us to loan Mikkel Andersen out and get him some games."