Mithun and Vinay Kumar picked up seven wickets between them as Uttar Pradesh were reduced to 221 for 9 on Day 2. They still trail Karnataka by 136 runs with only one wicket in hand. 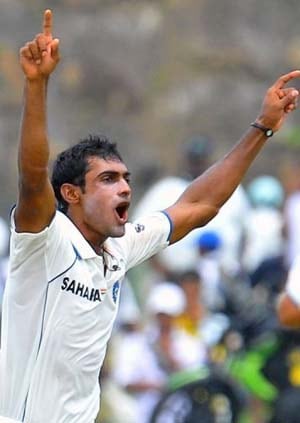 Seamers Abhimanyu Mithun and R Vinay Kumar wreaked havoc as Karnataka reduced Uttar Pradesh to 221 for nine, giving themselves a good chance to grab first innings lead, on the second day of the Ranji Trophy quarterfinal match in Bangalore on Thursday.

Mithun was the most successful bowler with figures of four for 70 but Vinay was the most difficult as he picked up three wickets after conceding 49 runs in 18 overs.

Sharath removed Ali Murtaza (1) caught behind by Gautam, who claimed first of the three catches in the day.

UP are still 128 runs behind Karnataka's first innings score of 349 with the hosts needing to pick up just one more wicket to gain a first innings lead at Chinnaswamy Stadium on Friday.

For UP, Parvinder Singh was the lone crusader with the bat as he missed his century by eight runs. He was the last man to be dismissed by part-timer Robin Uthappa. He made 92 runs off 181 balls with 13 boundaries. The 110-run partnership between Parvinder (92) and Piyush Chawla (56) for the seventh wicket raised hopes for the visitors to wriggle out of the turmoil, but in-form Mithun had the latter caught behind by Chidambaram Gautam to bring back the game in their favour.

Earlier, UP picked up five wickets for just 52 runs to restrict Karnataka to 349 runs after they had ended the opening day at 297 for five. The saving grace for the hosts in the morning session was when Gautam became the third batsman in the innings to belt a century. He faced 118 balls to reach his well-crafted 100 by cracking 16 boundaries, before he was castled by a medium pacer from Amit Mishra. Abrar Kazi and Mithun were the other two batsmen who reached double figures, before they were sent back into the dressing room for 23 and 13, respectively

Comments
Topics mentioned in this article
English Premier League Manchester City West Ham United Samir Nasri Vincent Kompany Football Cricket
Get the latest Cricket news, check out the India cricket schedule, Cricket live score . Like us on Facebook or follow us on Twitter for more sports updates. You can also download the NDTV Cricket app for Android or iOS.