Rafael Benitez tied up in knots over club colours

"My first tie was blue," said Rafael Benitez, whose appointment angered Chelsea fans due to his previous role as Liverpool manager. 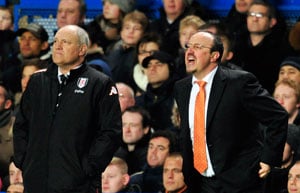 As if being roundly booed by the fans of his new club was not bad enough, Chelsea interim manager Rafael Benitez now finds himself receiving criticism for the colour of the ties he wears.

Some Chelsea fans complained after the Spaniard donned a 'red' tie during Wednesday's 0-0 draw with Fulham, even though it was actually orange.

Benitez, meanwhile, protested that he had been wearing the right colour tie for his first match in charge, against Manchester City.

"My first tie was blue," said Benitez, whose appointment angered Chelsea fans due to his previous role as Liverpool manager.

"I have a lot of respect for all my clubs. If not, I'd wear white for Real Madrid, because I was there when I was 11."

Benitez has also encountered problems squeezing into his official club suit, and is awaiting delivery of a custom-made suit from Italian fashion house Dolce and Gabbana.

"The Italian style is different," he said.

"It's really nice, but it's a style for young people, not old people. Over 25, everyone is different. The Italian style is more for players.

"They have to make the right one. The colours are the colours."

Comments
Topics mentioned in this article
Football Arsenal Liverpool Fulham Manchester City Alex Ferguson Mark Hughes English Premier League
Get the latest updates on IND vs NZ 2021, check out the Schedule and Live Score . Like us on Facebook or follow us on Twitter for more sports updates. You can also download the NDTV Cricket app for Android or iOS.