Interim Chelsea manager Benitez reiterated that he would be leaving Stamford Bridge as planned at the end of the season, having signed a short-term contract in November following the sacking of Roberto di Matteo. 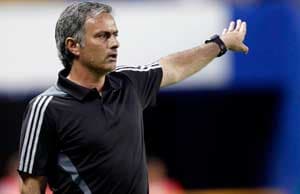 Rafael Benitez said on Tuesday that he expected to be replaced as Chelsea coach by the club's former manager, Jose Mourinho.

Interim Chelsea manager Benitez reiterated that he would be leaving Stamford Bridge as planned at the end of the season, having signed a short-term contract in November following the sacking of Roberto di Matteo.

Real Madrid coach Mourinho, who left the London club in September 2007 after three years in charge, has been strongly linked with a return to his former side.

"The next year there will be another manager," said Benitez.

"I think everybody knows who will be here," the Spaniard added, in a clear reference to Portuguese manager Mourinho.

However, Benitez would not be drawn into referring to Mourinho directly by name and insisted that the speculation about the identity of his successor would not distract him from the task at hand.

For all he has done in guiding Chelsea into next week's Europa League final against Benfica, Benitez has never been accepted by the Blues faithful on account of his prolonged war of words with the Londoners in general, and Mourinho in particular, when he was in charge of Liverpool.

However, he is on the brink of securing a return to the Champions League for Chelsea, as victory over Tottenham Hotspur in Wednesday's London derby would see the third-placed Blues move six points clear of Spurs with two games of the season left and a far better goal difference.

As to his own future, Benitez -- who has been linked with German club Schalke -- said: "My future is Tottenham. After, we will see. At the moment, I'm just thinking about Tottenham and what we could do.

"I have to keep doing my job, that is trying to prepare the team properly for every game and the agents, they have to do their jobs."

There will be another Portuguese former Chelsea manager opposite Benitez on Wednesday in the shape of Tottenham coach Andre Villas-Boas, who was sacked by the Blues last season amid reports he had fallen out with senior players such as captain John Terry.

"I think he's a good manager. He's working hard for his new team," Benitez said, before turning his attention back to Chelsea.

"What I find every day is a very good group of players, keen to learn, ready to do things and to improve.

"You could see a lot of improvement this year. It's a good group of professionals."

Luiz was pictured on television grinning after luring Rafael da Silva into committing a foul that saw the United right-back sent off in the dying stages of Chelsea's 1-0 win at Old Trafford on Sunday.

It prompted Ferguson to accuse the Brazilian of acting like a "dying swan", but Benitez said Luiz was merely smiling in response to taunts from United's fans.

"David Luiz was laughing because the fans were abusing him," Benitez said. "After was the red card (for Rafael). It was very clear, the timing.

"If we continue talking about this, instead of trying to eradicate the bad tackles that you can see every week, I think we're giving importance to something that is not as important.

"I don't like this situation, but we are talking about one of the best players in the Premier League."

Chelsea will have Belgian attacking midfielder Eden Hazard available against Spurs after he missed the game at United with a calf injury.