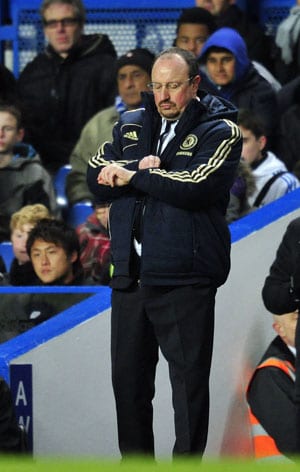 Chelsea allowed a two-goal first half lead to slip as visitors Southampton battled back for a 2-2 draw that left the European champions 13 points adrift of Premier League leaders Manchester United and all but extinguished their domestic title hopes this season.

"We cannot be happy drawing at home," said Benitez. "We have to defend as a team, as a unit, a bit better," the Spaniard added.

"It's something we have to improve. It's a question of experience.

"We know the problems we have when the other team are well organised. We have to sustain attacks, keep the ball, and that's not something we did today (Wednesday)."

Chelsea led through Demba Ba and Eden Hazard but Southampton, for whom the draw moved them three points clear of the relegation zone, recovered through Rickie Lambert and Jason Puncheon.

Benitez has been on the end of taunts from Chelsea supporters ever since replacing sacked fans' favourite Roberto di Matteo in November.

And he admitted the hostile atmosphere at Stamford Bridge was beginning to affect his players.

The return of Terry would provide Chelsea with a major lift, particularly after the home supporters had again voiced their frustration.

But the centre-back, who was on the bench against Southampton, is not yet fully recovered from a knee problem.

"He's not match fit to play 90 minutes," said Benitez. "He needs to play some minutes. We'll see how he trains. It will be difficult.

"He needs games and minutes, but at the right time. It was easier the other day. Today (Wednesday) wasn't the game.

However, Benitez would not be drawn on what that meant for his prospects of extending his stay at Chelsea beyond the end of the season.

"It's fine for him (Guardiola)," said Benitez. "He deserves to go there. No, it's not a surprise."

The interim manager also insisted Fernando Torres would be unaffected after once again being booed by Chelsea supporters after appearing as an 80th minute replacement for Frank Lampard.

"Torres is a professional, he's concentrated and will try and do his best," said Benitez.

Meanwhile Southampton manager Nigel Adkins believed this result showed how the south coast club were on the rise.

"It's two defeats in 12 games, both one-nils, and it shows we're improving," Adkins said. "I just said 'stick to the game-plan'.

"We could have chased it, played two up, and it could have been like Aston Villa here when they were done by eight (goals).

"We believed the plan was the right thing to do, so we stuck at it. Not many teams will come back from 2-0 down against Chelsea.

"There's a continual growing belief and maturity about the players. They're becoming accustomed to playing at this level now. We concentrate one game at a time. Let's stay in the here and now and work hard."

Comments
Topics mentioned in this article
Football Manchester City Liverpool Arsenal Southampton Mark Hughes Alex Ferguson English Premier League
Get the latest updates on ICC T20 Worldcup 2022 and CWG 2022 check out the Schedule, Live Score and Medals Tally. Like us on Facebook or follow us on Twitter for more sports updates. You can also download the NDTV Cricket app for Android or iOS.