Gabriel and Santi Cazorla were sent off as Kurt Zouma and Eden Hazard exploited their dismissals to help Chelsea F.C. revive their Premier League campaign with a 2-0 win over Arsenal F.C. 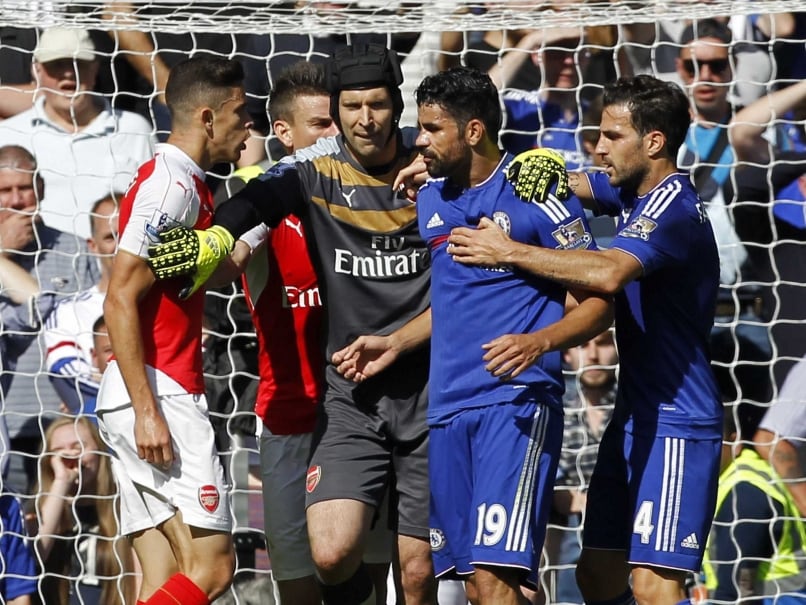 Kurt Zouma and Eden Hazard scored as Chelsea exploited the dismissals of Gabriel and Santi Cazorla to beat Arsenal 2-0 on Saturday and revive their Premier League title defence. (Scorecard)

Gabriel was sent off late in the first half after a tussle with the provocative Diego Costa and Zouma, playing in place of Chelsea captain John Terry, put the hosts ahead in the 53rd minute.

Cazorla was shown a second yellow card for sliding in on Cesc Fabregas and Hazard made the game safe a minute from time with a shot that beat former Chelsea goalkeeper Petr Cech via a sizeable deflection off Calum Chambers.

It was for Chelsea a first home league win of the campaign and, arriving on the back of Wednesday's 4-0 win over Maccabi Tel Aviv in the Champions League, fired hope that Jose Mourinho's side may yet salvage something despite making their worst start to a season in 29 years.

Arsenal manager Arsene Wenger had overcome Mourinho for the first time in last month's Community Shield, but here found himself in the familiar position of having been eclipsed by his Portuguese nemesis.

His side have not beaten Chelsea in the league since October 2011 and following the mid-week defeat at Dinamo Zagreb in which Olivier Giroud was sent off, this was another partly self-inflicted setback.

As ever in this fixture, the first tremors of the contest were felt before kick-off, with Terry's inclusion on the substitutes' bench followed by a keenly anticipated handshake between Wenger and Mourinho.

Wenger had swerved a chance to shake his Chelsea counterpart's hand after Arsenal's 1-0 win in the Community Shield, but on this occasion Mourinho made himself impossible to avoid by lingering beside the tunnel.

Eyes averted, the pair performed the most perfunctory of handshakes before taking their seats.

Mourinho said Terry's omission was "tactical" and it seemed to reflect concern over the pace of Theo Walcott, who got in behind Chelsea's defence early on and rounded goalkeeper Asmir Begovic, only to run the ball out.

The England forward also squandered an opportunity created by Mesut Ozil's pass by shooting straight at Begovic, but as the first half wore on, so Chelsea's grip on it tightened.

Back at a ground he had called home for 11 years, Cech was by far the busier goalkeeper, smothering an attempt from Pedro Rodriguez, brilliantly picked out by Fabregas, and later parrying the Spain forward's 20-yard drive.

Hazard had a strong penalty appeal turned down after being eased off the pitch by Gabriel, which drew a rueful smile from Mourinho.

Zouma and Pedro also shot narrowly off target before the pressure finally told with the dismissal of Gabriel.

Costa, characteristically, was the catalyst, wildly lashing out at Laurent Koscielny inside the Arsenal box and then clashing with Gabriel, which saw both players booked.

But Costa continued to goad Gabriel as the players walked down the pitch and when the centre-back reacted with a sly kick, referee Mike Dean brandished the red card.

Arsenal lost Francis Coquelin at half-time, the midfielder being replaced by Chambers after hurting his knee during the first half, and eight minutes into the second half they lost parity in the match as well.

Fabregas floated a left-of-centre free-kick towards the far post and Zouma stole behind Koscielny and Nacho Monreal to plant a header past Cech for his first Premier League goal.

Moments later Cech parried a powerful strike from Hazard, who also shot narrowly wide after a driving run into the box.

The disappointing Alexis Sanchez spurned a presentable chance at the other end, scuffing a volley into the ground and over the bar, while Walcott curled wide.

But Arsenal's chances vanished 12 minutes from time when Cazorla caught Fabregas on the ankle and joined Gabriel in the changing room, with Hazard's deflected strike securing the points.

Comments
Topics mentioned in this article
Diego Costa Santi Cazorla Kurt Zouma Arsenal Chelsea English Premier League Football
Get the latest updates on SA vs IND 2021-22, check out the Schedule and Live Score . Like us on Facebook or follow us on Twitter for more sports updates. You can also download the NDTV Cricket app for Android or iOS.