Manchester United were rocked by Etienne Capoue's first half opener and, although Marcus Rashford equalised after the break, Jose Mourinho's side capitulated in the closing stages of the Premier League match 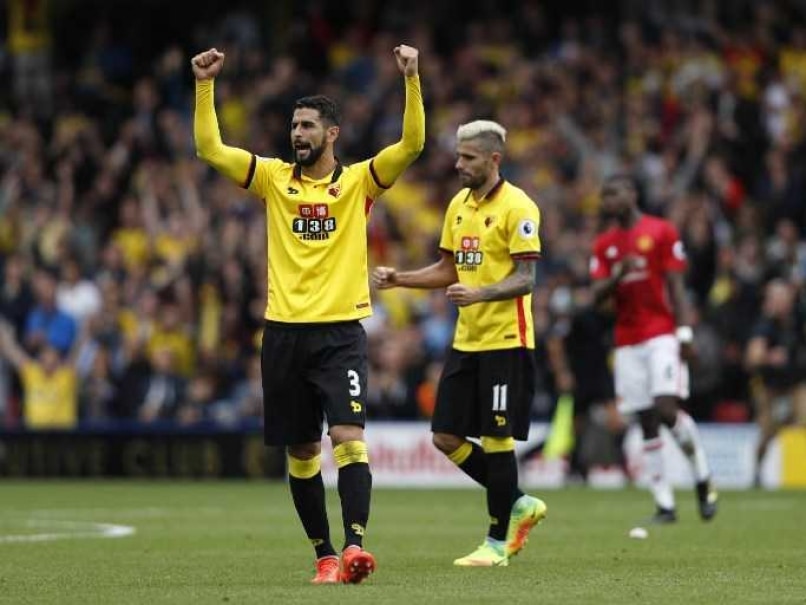 Watford piled on the misery for Jose Mourinho as Manchester United crashed to a third successive defeat in an embarrassing 1-3 loss in the Premier League at Vicarage Road on Sunday.

Mourinho's side were rocked by Etienne Capoue's first half opener and, although Marcus Rashford equalised after the break, United capitulated in the closing stages.

Juan Camilo Zuniga restored Watford's lead with seven minutes left before Troy Deeney's penalty condemned Mourinho to a third consecutive defeat for the first time since he was in charge at Porto in 2002.

It was the first time United had lost three in a row since the unlamented Louis van Gaal presided over four successive defeats in December last year.

Adding to the indignity for United, it was their first loss in 30 years against Watford, who ended a run of 11 successive defeats against the Manchester giants.

United are already lagging six points behind Premier League leaders Manchester City and the feelgood factor following the three wins that marked the start of the Mourinho era has been completely erased.

After losing to City, Feyenoord in the Europa League and now Watford over the last week, the size of the task facing Mourinho as he rebuilds United has been laid bare.

They looked out of sync from the moment United goalkeeper David de Gea collided with Chris Smalling as they made a hash of dealing with Sebastian Prodl's towering cross.

When de Gea dropped the ball straight to Odion Ighalo a goal seemed certain, but the Watford striker fired hurriedly wide of the unguarded net from the edge of the penalty area.

It was a shocking miss, but even that escape couldn't shake United from their lethargy and de Gea had to throw himself to his left to claw away a goalbound header from Deeney moments later.

Paul Pogba has struggled to live up his world record fee since joining United and, amid another tepid display, the France midfielder gave a sudden glimpse of his ability when he quickly shifted the ball to set himself for a curling 25-yard strike that left Watford goalkeeper Heurelho Gomes rooted to the spot as it cannoned off the crossbar.

But Watford's relentlessly physical approach was wearing United down and Anthony Martial needed several minutes treatment after being pole-axed by a clash of heads with Daryl Janmaat.

Martial eventually got to his feet but the France international still appeared groggy when he was made a fatal mistake in the 34th minute.

Dwelling too long on the ball deep inside his own half, Martial was caught in possession by Miguel Britos and, with United's defence completely exposed, Janmaat had time and space to pick out the unmarked Capoue, who drilled a clinical finish past de Gea.

As Watford celebrated, Mourinho questioned whether Martial had been fouled and the winger lay flat on the turf before being substituted.

That ignominious exit encapsulated a forgettable half for United, but they equalised with a rare incisive attack in the 62nd minute.

Rashford played a one-two with Ibrahimovic and broke into the penalty area, where he showed his predatory instincts by sweeping home from close-range after the Swede's cross deflected into his path off Valon Behrami.

Ibrahimovic nearly won it for United in the 78th minute when he met Marouane Fellaini's cross with a powerful header that Gomes brilliantly pushed away.

But United never looked convincing and they crumbled at the back in the 83rd minute as Zuniga scored with his first touch less than a minute after coming on.

Roberto Pereyra was unchecked when he raced onto Nordin Amrabat's pass into the United penalty area and he cut the ball back to Colombia defender Zuniga, who lashed a fine strike past de Gea to leave Mourinho ashen-faced.

There was even worse to come for Mourinho in stoppage-time when Fellaini tripped Zuniga in the area and Deeney stepped up to lash home the spot-kick.

Comments
Topics mentioned in this article
Manchester United Watford Troy Deeney Etienne Capoue Marcus Rashford English Premier League Jose Mourinho Football
Get the latest updates on ICC T20 Worldcup 2022 and CWG 2022 check out the Schedule, Live Score and Medals Tally. Like us on Facebook or follow us on Twitter for more sports updates. You can also download the NDTV Cricket app for Android or iOS.