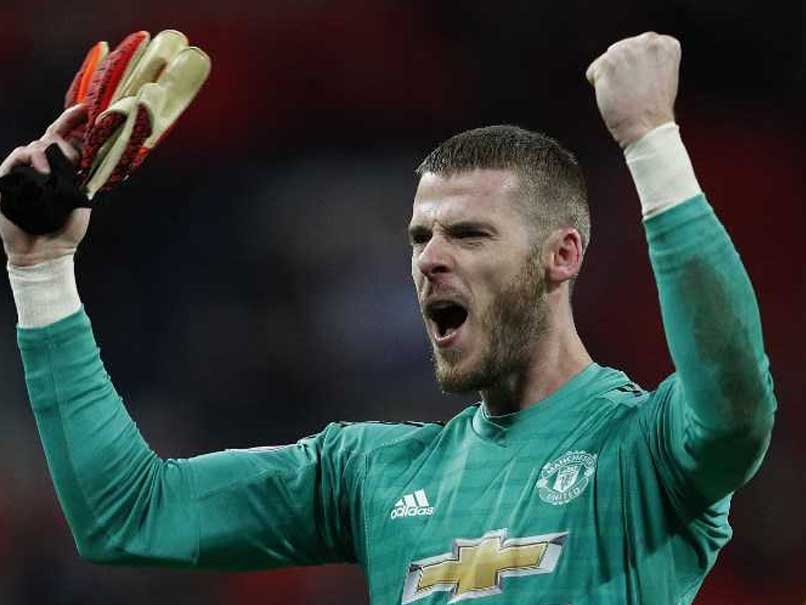 Marcus Rashford scored the only goal in the 44th minute of a thrilling encounter.© AFP

Ole Gunnar Solskjaer said David de Gea was making a caseto be considered Manchester United's greatest-ever goalkeeper after he produced a masterclass on Sunday to protect his side's 1-0 lead against Tottenham. The match at Wembley pitted two of the bookmakers' favourites to permanently replace Jose Mourinho against one another but it was the interim United boss who came out on top against Mauricio Pochettino. Marcus Rashford scored the only goal in the 44th minute of a thrilling encounter and Paul Pogba impressed but the performance of the Spanish goalkeeper will live long in the memory.

He made 11 saves -- the most he has made in a top-flight league match without conceding a goal -- leaving Spurs players holding their heads in disbelief on multiple occasions.
Solskjaer hailed De Gea as "the best goalkeeper in the world" but also praised his team's defensive resilience and team spirit.

"We've had some great 'keepers at this club and I think he's challenging both Edwin (van der Sar) and Peter (Schmeichel) for the number one spot historically, he said.
"The win here was massive, the team spirit was massive, the belief and the joy in the dressing room absolutely fantastic," added the Norwegian, who has equalled Matt Busby's record of winning his first five league games in charge of United.

United were eight points behind Arsenal when Solskjaer became their caretaker manager on December 19 but are now level on points with the fifth-placed Gunners as they hunt down a Champions League qualification spot.

But the result is a devastating blow for Tottenham, who again came up short when the pressure was on and remain nine points adrift of Premier League leaders Liverpool.
Pochettino praised his side despite their defeat. "Tottenham did everything to win the game," he said. "Maybe we dominated and we created a lot of chances. It was an amazing second half, I am so pleased.

"Sometimes you win a game and you are disappointed, like when we won 3-0 at Old Trafford. They were better than us that day. Today the result should be different and I am happy."
Earlier, Tottenham settled quickly into their fluid passing game, enjoying the bulk of possession and went close to opening the scoring through Harry Winks before Jesse Lingard fired over from close range for the visitors.

United, with Lingard, Anthony Martial and Rashford racing forward at every opportunity, looked dangerous on the break.

Spurs striker Harry Kane had a close-range effort correctly ruled out for offside just after the half hour.

Moussa Sissoko pulled up sharply shortly before the break and although he returned to the pitch he was unable to continue, being replaced by Erik Lamela. Moments later United were ahead.

Lingard cut out a careless cross-field ball from Kieran Trippier and nudged the ball to Pogba, who had time to look up and measure a raking cross-field pass to Rashford, sprinting down the right.

Rashford still had plenty to do but kept his nerve to fire right-footed past Lloris and into the far corner -- Lloris got fingertips to the ball but was unable to keep it out.

Tottenham came out of the blocks smartly after the restart and Kane looked certain to level from close range but De Gea saved brilliantly with his left foot before pulling off a fine save to deny an Alli headed effort.

At the other end, Ashley Young sent over an inviting cross that Pogba headed straight at Lloris and the Spurs goalkeeper had to be alert to tip over another Pogba effort that came at the end of a long spell of United possession.

Spurs, roared on by a passionate home crowd, were building up a head of steam and Alli had another a golden chance to equalise but De Gea was again equal to the task.

The Spaniard produced yet another stunning save to keep out Toby Alderweireld before flying to his right to cling on to a Kane free-kick.

Spurs had further chances in a frenetic ending but could find no way past the inspired De Gea.

Kane took a knock in the closing seconds of the match, with Pochettino saying "we hope it is not a big issue".

Manchester United English Premier League Football
Get the latest updates on ICC T20 Worldcup 2022, check out the Schedule and Live Score. Like us on Facebook or follow us on Twitter for more sports updates. You can also download the NDTV Cricket app for Android or iOS.