While Liverpool held Chelsea to a 1-1 draw, Watford stunned Arsenal with a 2-1 win in the Premier League on Tuesday. 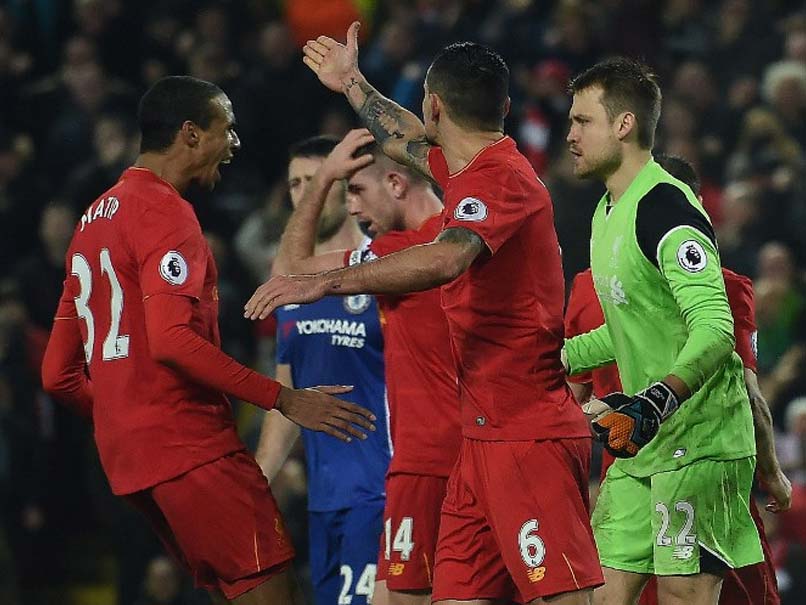 Liverpool earned a comeback 1-1 draw against Chelsea after their goalkeeper Simon Mignolet saved a penalty in the 76th minute to deny the Premier League leaders victory at Anfield on Tuesday. Meanwhile Arsenal's title challenge was torpedoed by Watford's shock 2-1 win. Antonio Conte's Chelsea grabbed the lead in the 25th minute when David Luiz cheekily took a quick free-kick that flashed past Mignolet, who was caught out while he lined up his defensive wall.

Mignolet looked bewildered that the Brazil defender's effort wasn't ruled out, but referee Mark Clattenburg allowed Luiz to celebrate his first goal since rejoining Chelsea from Paris Saint-Germain in August.

Georginio Wijnaldum came to Liverpool's rescue as the midfielder equalised with a 57th minute header from James Milner's cross.

Costa should have won it for Chelsea in the 76th minute when Joel Matip fouled him in the penalty area.

However, the Spain striker's spot-kick was pushed away by Mignolet as the keeper made amends for his earlier error.

For just the second time in their last 17 leagues games, Chelsea finished without three points, but the Blues are still nine points clear of second placed Tottenham.

"It's a pity Diego missed the penalty, but we must be happy with the result and the performance because it is not easy to play away at Liverpool,"Conte said.

Fourth placed Liverpool, 10 points behind Chelsea, have only won one of their last nine matches in all competitions, but their battling display at least partially eased the pain of Saturday's FA Cup embarrassment against second tier Wolves.

"I'm not sure happy is the right word, but I'm proud because the boys did outstanding things against a really good side," Reds boss Jurgen Klopp said.

At the Emirates Stadium, Arsene Wenger was again watching from high in the stands as he served his touchline ban and the Arsenal boss was rocked in the 10th minute when Younes Kaboul's powerful strike deflected in off Aaron Ramsey.

Watford picked up their first-ever #PL victory against Arsenal in their 2-1 win at the Emirates Stadium #ARSWAT pic.twitter.com/skqE3GmDYj

Watford suffered an embarrassing FA Cup defeat at third tier Millwall on Sunday and had gone seven league games without a win.

But the view from the posh seats got even more uncomfortable for Wenger three minutes later as Troy Deeney doubled Watford's lead with a close-range finish after Etienne Capoue unhinged the Arsenal defence.

Alex Iwobi got one back for Arsenal when the young winger rammed home from Alexis Sanchez's cross in the 58th minute.

Gunners forward Lucas Perez hit the crossbar in the closing stages, but Watford held on for their first league victory at Arsenal since 1988.

Arsenal are nine points behind Chelsea in third place and Wenger said: "It was obvious we were not sharp enough. It looked mentally that we were not ready for the challenges.

"Everybody in the Premier League is strong physically and 90 percent (effort) is not enough."

Tottenham missed a chance to close the gap on Chelsea after being held to a dour 0-0 draw by struggling Sunderland.

Mauricio Pochettino's side, who lost England left-back Danny Rose to a first half injury, rarely got into top gear in their second successive draw.

Claudio Ranieri's team were shattered when Michael Keane nodded down for Vokes from a corner and the ball appears to hit the striker's hand before he lashed in from close range in the 87th minute.

"I saved the penalty so I'm happy but disappointed - and that shows how hungry we are. We deserved 3 points" - @LFC's Simon Mignolet #LIVCHE pic.twitter.com/g8O9PhAbTU

Leicester, with just one win in their last eight league games, are now two points above the relegation zone.

"It was handball for everybody but not the referee. He didn't see it and we lost the match," Ranieri fumed.

Sam Allardyce celebrated his first league win as Crystal Palace manager at the sixth attempt as the lowly Eagles won 2-0 at Bournemouth.

Scott Dann's 46th minute tap-in from Damien Delaney's flick on put third bottom Palace ahead and Christian Benteke wrapped up the points in second half stoppage-time.

Fourth bottom Swansea boosted their bid for survival with a 2-1 win over Southampton at the Liberty Stadium.

Middlesbrough drew 1-1 with West Bromwich Albion at the Riverside Stadium.

Comments
Topics mentioned in this article
English Premier League Arsenal Liverpool Chelsea Football
Get the latest updates on India vs Australia and check out  Schedule, Results and Live Score. Like us on Facebook or follow us on Twitter for more sports updates. You can also download the NDTV Cricket app for Android or iOS.