Premier League clubs issued a joint statement saying players will wear "Black Lives Matter" on the back of their shirts instead of their names for the first 12 matches of the league's restart. 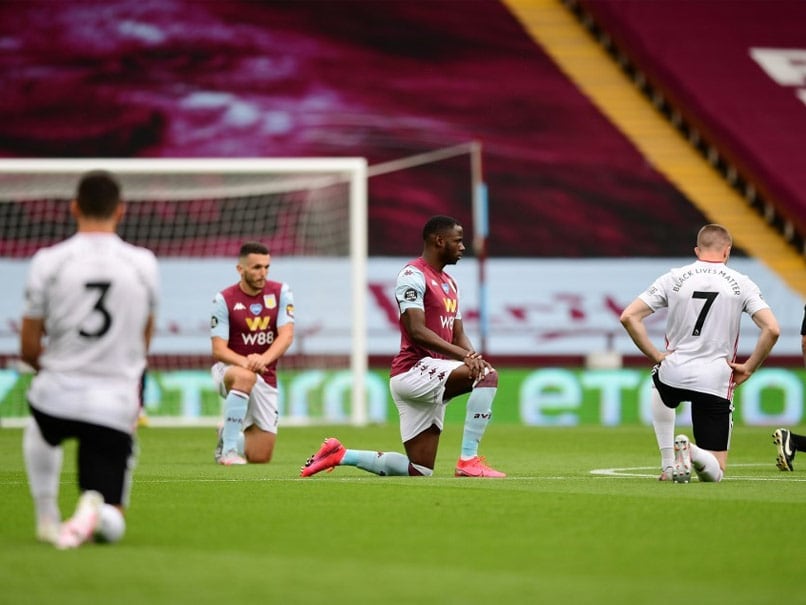 Aston Villa and Sheffield United players knelt in protest against racism ahead of their match.© AFP

Aston Villa and Sheffield United players took a knee at kick-off on Wednesday as the Premier League returned after a 100-day stoppage due to coronavirus. The first of 92 matches to be played behind closed doors was preceded by a minute's silence in memory of those who have died from COVID-19. Players and officials dropped to one knee to protest racial injustice in solidarity with the worldwide protests following the death of George Floyd while in police custody in the US.

All players will wear "Black Lives Matter" (BLM) on the back of their shirts where names are normally printed for the first 12 matches of the Premier League's restart.

The clubs issued a joint statement soon after kick-off backing the players' actions.

"Aston Villa and Sheffield United were proud to stand in solidarity with the actions of the players and coaching staff of both football clubs during the first 10 seconds of tonight's Premier League fixture, expressing our collective support for the Black Lives Matter movement," the statement said.

"In the first Premier League fixture of Project Restart both clubs hope that the act of 'taking a knee' will send a strong message of unity and amplify the many messages of support from Premier League players and the wider football family."

The clubs said the directors of both clubs, the managers and the captains all fully supported the action.

"We believe that 'taking a knee' at the start of the fixture and after the pre-match minute's silence, allowed both clubs to pay their respects to COVID-19 victims and to show the deep gratitude we all feel for our brave and selfless front-line workers," the statement added.

Villa manager Dean Smith's father was one of more than 42,000 people in Britain to die from coronavirus so far.

Ron Smith used to be a steward at Villa Park and a steward's jacket was placed among the empty stands in his honour.

"It's a fantastic gesture from the football club," Smith told Sky Sports.

"My heart goes out to anybody who has lost someone during this period."

On the field, Villa face a battle to avoid relegation as they kicked off second bottom of the table, but victory would lift them up to 16th.

At the other end of the table, Sheffield United are aiming to qualify for European football next season for the first time in their history.

A win would edge the Blades above Manchester United into fifth.

Manchester City host Arsenal later on Wednesday in a match with huge repercussions at the top of the table.

Victory for Arsenal boss Mikel Arteta on his return to the Etihad, where he spent three-and-a-half years as City assistant boss, would give Liverpool the chance to seal a first league title in 30 years when they face Everton in the Merseyside derby on Sunday.