Sergio Aguero, with his 150th league goal, David Silva and Leroy Sane were also on the mark as Manchester City continued their unbeaten start. 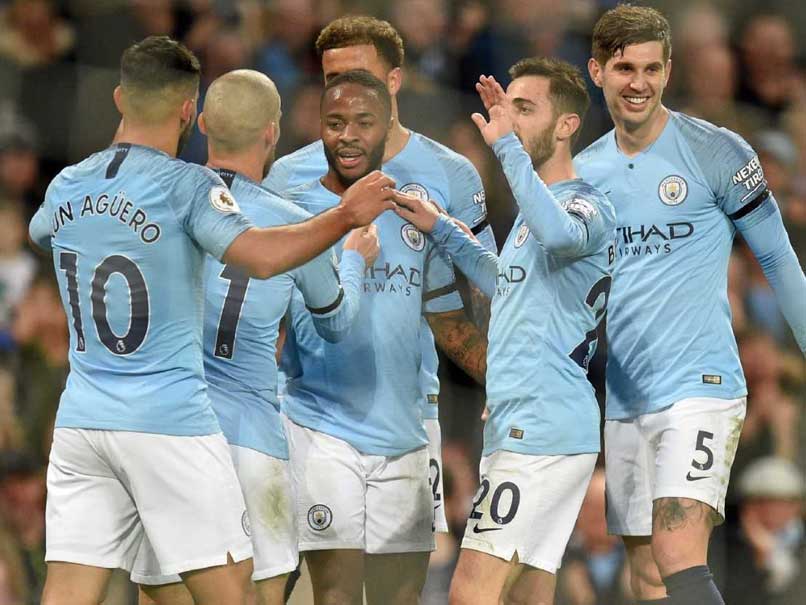 Raheem Sterling scored twice fresh from agreeing a new five-year contract with Manchester City as the champions swept aside Southampton 6-1 on Sunday to return to the top of the Premier League table. Sergio Aguero, with his 150th league goal, David Silva and Leroy Sane were also on the mark as Pep Guardiola's side continued their unbeaten start to their title defence. "We played excellent, without and especially with the ball," Guardiola told the BBC as he insisted there was more to come from England international Sterling.

"He is more mature now than he was when we first met at the club...He is 23 and he can be a better player."

Southampton had the minor consolation of becoming the first team in 630 minutes to score against City but the leaders' form is ominous for the rest of the division.

City are scoring at a marginally faster rate than they did while racking up a record 106 goals last season, and they made a devastating start at the Etihad that finished the game as a contest within 18 minutes of kick-off.

Five minutes had gone when Aguero orchestrated an attack on the edge of the Southampton area, David Siva then moving the ball on to the overlapping Sane, whose cross was turned into his own goal by Saints' Wesley Hoedt.

It took a further six minutes for City to double the lead, Bernardo Silva setting free Sterling on the right and the England forward selflessly squaring for Aguero to hammer in from close range.

It was the Argentine's 150th league goal for City, a landmark that moved him level with Michael Owen in eighth place on the Premier League's all-time goalscoring list.

It appeared City were capable of scoring almost at will and a slick move saw them make it three in the 18th minute.

Again, Sterling was heavily involved, accepting Bernardo Silva's pass and putting in a cross that was a little too high for Sane but arrived for David Silva, who volleyed in at the far post.

Southampton manager Mark Hughes, whose future has been the subject of increasing speculation following a run that has now seen him win just four of his 19 league games in charge, reacted furiously to yet more appalling defending from his side.

"We were poor in that opening period, you have to be resolute to keep back an outstanding City team," said Hughes. "We were a bit lightweight and didn't deal with one-on-one situations."

Southampton did, however, pull a goal back after half an hour, becoming the first English team to score against City since Newcastle at the Etihad at the start of September.

It was a rare mistake from goalkeeper Ederson that led to the Saints goal, the Brazilian diving unnecessarily at the feet of Danny Ings and tripping the forward, who convincingly shot home the penalty.

However there was never a hint that Southampton might be able to launch anything resembling a fightback and City ended the half as they had begun it -- by scoring.

David Silva's through ball appeared to be going out of play but Aguero showed impressive persistence to chase and pull it back for Sterling who, first miskicked but then shot past Saints goalkeeper Alex McCarthy from six yards.

Southampton improved at the start of the second half, with James Ward-Prowse and Ings -- via wicked deflection off Fernandinho -- forcing Ederson to make fine stops.

But City continued to threaten, and Sane almost made it five with a vicious left-foot shot from the edge of the area that struck the bar just after the hour.

Sterling did in the 67th minute when he latched onto Aguero's perfectly-weighted pass to score his second goal of the afternoon.

Sane completed an impressive individual and team display in stoppage time when he steered in a left-foot shot from 18 yards following another assist from Sterling.

Southampton English Premier League Manchester City vs Southampton, Game week 11 Football
Get the latest updates on ICC T20 Worldcup 2022 and CWG 2022 check out the Schedule, Live Score and Medals Tally. Like us on Facebook or follow us on Twitter for more sports updates. You can also download the NDTV Cricket app for Android or iOS.