Premier League Preview: Will Brendan Rodgers do it for Liverpool?

The appointment of manager Brendan Rodgers is one of the biggest gambles in Liverpool's history. 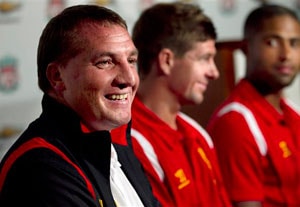 The appointment of manager Brendan Rodgers is one of the biggest gambles in Liverpool's history.

With Liverpool missing from the lucrative Champions League for a third straight season as UEFA's financial fair play rules are phased in, owner Fenway Sports Group took a risk to try and ensure the Reds aren't jettisoned permanently from the elite teams.

That meant hiring the 39-year-old Northern Irishman despite him having only one year's experience in the Premier League.

It was admittedly an impressive year for Rodgers, who steered promoted Swansea to an 11th-place finish in its first topflight season by playing an attractive style of football despite having little money to spend on players.

The same couldn't be said for the man he replaced, Kenny Dalglish. The Liverpool legend led the club to the League Cup title to end a six-year trophy drought and the FA Cup final, but paid the penalty for finishing eighth in the league.

It was the 18-time English champions' lowest league placing in 18 years and left them 17 points off a Champions League qualification spot, the minimum goal of the American owners after spending about $200 million on players during Dalglish's reign.

The Champions League remains the aim for Rodgers, who is Liverpool's fourth manager in less than two years - a previously unheard of changeover at a club renowned throughout the football world for loyalty and patience.

"It's an aim for every manager at a top club," Rodgers said. "That's the holy grail. But also, in time, we want to be challenging for the title. It's not going to be straight away because that's not realistic, winning the title is something we want to achieve. It's not just aiming for fourth place.

"The Champions League is fantastic and that's where this club wants to be, (but) I'm very much a realist. It's certainly going to be a few years in relation to where the team is at now. It will need some investment and it will need time for me to work."

The only player investment so far has been signing Italy striker Fabio Borini from Roma for 10.5 million pounds. Meanwhile, Dirk Kuyt, Maxi Rodriguez, Alberto Aquilani and Fabio Aurelio have all left Liverpool, and rumors persist that Daniel Agger is bound for defending champion Manchester City or Barcelona.

The loss of Agger would be a blow as the Danish international's central defensive partnership with Martin Skrtel was one of the few bright spots in a disappointing last season. Led by that pair, Liverpool conceded the third-fewest goals in the league despite some erratic displays by goalkeeper Pepe Reina.

Liverpool's major problems were at the other end of the pitch and its home form, scoring fewer goals than even relegated Blackburn and winning only six out of 19 league matches at Anfield.

Both of those unwelcome statistics were partially due to the underwhelming performances of recruits Andy Carroll, Stewart Downing, Charlie Adam and Jordan Henderson, who totaled eight league goals between them after costing about 80 million pounds.

Also unwelcome was the racism specter implicating Luis Suarez that cast a cloud over the club which is still yet to fully dissipate.

His eight-match ban for racially abusing Patrice Evra and the subsequent furor for failing to shake the Manchester United defender's hand before a game ensured Suarez's every touch at the Olympic football tournament throughout Britain was loudly booed.

Still nursing a feeling of injustice, Suarez will need to harness his volatile temperament when facing hostile crowds if he is to properly assume the responsibility of Liverpool's most incisive attacking player.

"Opposition fans only give people stick because they're good players. You don't see bad ones getting it," Rodgers said. "For me, the message is that we have to move on."

Rodgers is set to change Liverpool's formation from what was mostly 4-2-3-1 last season to 4-3-3 with a focus on dominating possession and pressing high up the pitch when the team doesn't have the ball, a style not dissimilar to that used by Spain to win the World Cup and past two European Championships.

Rodgers was once a youth-team coach at Chelsea under Jose Mourinho and has also managed second-tier clubs Watford and Reading. His impact already at Liverpool has captain Steven Gerrard believing an immediate return to the top four is possible.

"We are Liverpool, we can't finish eighth. We have got to take the criticism for underperforming last year and put it right," Gerrard said. "Obviously I am biased, but I think playing Champions League football for this club would be more special than anywhere else. If we work hard enough and perform well enough it will come."